Davico lives with his family above La Casita – the Little House – in Guatemala City in the early 1950s. But it’s not just a little house. It’s also the family restaurant!
The restaurant provides plenty of distraction and adventure for Davico and his older brother, Felipe. The mean cook, Augusto, and the always-late waiter, Otto, love to play tricks on Davico. There’s a huge oven in the gas cookstove, which Felipe knows how to light ― if he can only reach the box of matches above the stove. And there’s the endless fascination of the glass tank of live lobsters ― including the king of them all, Genghis Khan, who stares at Davico with round unblinking black eyes, waving his antennas like submarine periscopes. Could Genghis Khan climb on the back of the other lobsters and get out of the tank, Davico wonders. Could he move faster on land than in the water?

For Hasina and her younger brother Araf, the constant threat of Sit Tat, the Myanmar Army, is a way of life in Rakhine province—just uttering the name is enough to send chills down their spines. As Rohingyas, they know that when they hear the wop wop wop of their helicopters there is one thing to do—run, and don’t stop. So when soldiers invade their village one night, and Hasina awakes to her aunt’s fearful voice, followed by smoke, and then a scream, run is what they do.

The coins in Santiago’s hand are meant for the bus fare back to his abusive abuela’s house. Except he refuses to return; he won’t be missed. His future is uncertain until he meets the kind, maternal María Dolores and her young daughter, Alegría, who help Santiago decide what comes next: He will accompany them to el otro lado, the United States of America. They embark with little, just backpacks with water and a bit of food. To travel together will require trust from all parties, and Santiago is used to going it alone. None of the three travelers realizes that the journey through Mexico to the border is just the beginning of their story.

Santiago’s Road Home is a WOW Recommends: Book of the Month for December 2020.

“When war threatens their home, Idriss and his mother must flee. He clutches his lucky charm–a single marble–throughout their journey, walking over hazardous terrain, crawling under barbed wire, and sailing on a fragile little boat. Will the marble’s luck help them avoid capture and bring them to the safety of a new world?”–

“With authenticity, integrity, and insight, this collection of poems addresses the many issues confronting first- and second- generation young adult immigrants and refugees, such as cultural and language differences, homesickness, social exclusion, human rights, racism, stereotyping, and questions of identity. Poems by Elizabeth Acevedo, Erika L. Sanchez, Samira Ahmed, Chen Chen, Ocean Vuong, Fatimah Asghar, Carlos Andres Gomez, Bao Phi, Kaveh Akbar, Hala Alyan, and Ada Limon, among others, encourage readers to honor their roots as well as explore new paths, offering empathy and hope for those who are struggling to overcome discrimination. Many of the struggles immigrant and refugee teens face head-on are also experienced by young people everywhere as they contend with isolation, self-doubt, confusion, and emotional dislocation. Ink Knows No Borders is the first book of its kind and features 65 poems and a foreword by poet Javier Zamora, who crossed the border, unaccompanied, at the age of nine, and an afterword by Emtithal Mahmoud, World Poetry Slam Champion and Honorary Goodwill Ambassador for UNHCR, the UN Refugee Agency. Brief biographies of the poets are included, as well. It’s a hopeful, beautiful, and meaningful book for any reader”–

Identical twins Ernesto and Raul Flores, seventeen, must flee El Salvador, make a harrowing journey across the Rio Grande and the Texas desert, face capture by immigration authorities, and struggle to navigate life in America.

Ebo is alone. His brother, Kwame, has disappeared, and Ebo knows it can only be to attempt the hazardous journey to Europe, and a better life―the same journey their sister set out on months ago. But Ebo refuses to be left behind in Ghana. He sets out after Kwame and joins him on the quest to reach Europe. Ebo’s epic journey takes him across the Sahara Desert to the dangerous streets of Tripoli, and finally out to the merciless sea. But with every step he holds on to his hope for a new life, and a reunion with his family. 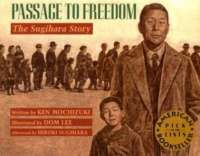 For the peaceful highlanders of Guatemala, life has become a nightmare. Helicopters slash like machetes through the once-quiet air. Soldiers patrol the streets, hunting down suspected guerillas. Villagers mysteriously disappear and children are recruited as soldiers. Tomasa’s family is growing increasingly desperate, especially after Mama goes into hiding with Tomasa’s oldest brother. Finally, after their house is razed to the ground and the villagers massacred, Tomasa, Manuelito, and baby Maria set off with Papa on a perilous journey to find Mama and Carlos, only to discover that where one journey ends, another begins. This gripping novel tells the story of how Tomasa’s family survives the Guatemalan army’s brutal regime and how, in the midst of tragedy, their love and loyalty — and Papa’s storytelling — keeps them going on their harrowing journey as refugees to the United States. Mirrored in the tapestries of Tomasa’s dreams, the dramatic events of the Guatemalan army’s “scorched earth” campaign of the 1980s are tempered with hope and the generosity of the human spirit.