Sudan, 1980s: Ger Duany knew what he wanted out of life–make his family proud, play with his brothers and sisters, maybe get an education like his brother Oder suggested, and become a soldier for his people when he’s old enough. But then his village was attacked by the North Sudanese military, death kept taking his loved ones away, and being a child soldier was not what he thought it would be. Amid heartbreak, death, and violence, can this lost boy find his way to safety?

In this picture book based on A Long Walk to Water, a young South Sudanese girl goes on a journey that requires determination, persistence, and compassion.

After her tribal village is attacked by militants, Amira, a young Sudanese girl, must flee to safety at a refugee camp, where she finds hope and the chance to pursue an education in the form of a single red pencil and the friendship and encouragement of a wise elder.

For Poni, life in her small village in southern Sudan is simple and complicated at the same time. But then the war comes and there is only one thing for Poni to do. Run. Run for her life. Driven by the sheer will to survive and the hope that she can somehow make it to the Kakuma refugee camp in Kenya, Poni sets out on a long, dusty trek across the east African countryside with thousands of refugees. In Kakuma she is almost overwhelmed by the misery that surrounds her. Poni realizes that she must leave the camp at any cost. Her destination is a compound in Nairobi. There, if she is lucky, she can continue her education and even one day convince authorities that she is worthy to go to the land of opportunity called America. Even more than the dramatic events of the story, it is Poni’s frank and single-minded personality that carries this novel. In a heartbreaking final twist, she finds her mother just as she is about to leave for the U.S., and must make the hardest decision of all.

When a nonprofit organization called Save the Girls pairs a fourteen-year-old Sudanese refugee with an American teenager from Richmond, Virginia, the pen pals teach each other compassion and share a bond that bridges two continents.

This book presents accounts of narrow escapes executed by oppressed individuals and groups while illuminating social issues and the historical background that led to wars in Sudan and the orphaned refugees known as the ‘Lost Boys’. 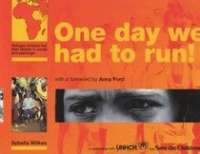 In an anthology of words and drawings compiled by a United Nations relief worker, refugee children from Somalia, the Sudan, and Ethiopia share their feelings about their loss of their homes and their families.

In the little village of Duk Padiet in southern Sudan, a boy named Jacob Deng thrives on the love of his mother, the companionship of his sisters, the excitement of learning how to look after his uncle’s herds of cattle. The year is 1987, and suddenly in the night soldiers from the north invade the village, looting, burning, and killing. The war has arrived, and the life of Jacob will never be the same. This novel is based on the real life experiences of a Sudanese boy who, with thousands of other boys from the region, fled for his life and spent seven years walking through deserts, grasslands and forests, crossing crocodile-infested rivers, surviving life in massive refugee camps. The so-called Lost Boys of Sudan – as they were called by an American aid organization – numbered as many as 27,000, and while many died – from starvation, attacks by wild animals, drowning, or through the brutality of the military – many survived. Jacob never returned to his village, but though he was only seven years old when he had to flee, he somehow managed to live through an almost unimaginable ordeal. Throughout the seven years covered in this story, Jacob resists the temptation to join the liberation army. Steadily Jacob finds himself more and more adhering to his mother’s advice that getting an education is crucial to escaping the cycle of violence that afflicts his country. Jacob’s struggle, then, is to persist in seeking out teachers and eventually a school where his ambition to learn about the world can be met. Through it all he learns about loyalty and love for close friends who have been thrust together with him on this extraordinary journey, and also about the guiding light provided by the memory of his mother.