Nine-year-old Betita and her parents fled Mexico after her uncle was killed by the cartels, and settled in Los Angeles seeking political asylum and safety in what her father calls Aztlan, the land of the cranes; but now they have been swept up by by the government’s Immigration Customs Enforcement, her father deported back to Mexico, and Betita and her mother confined in a family detention camp–Betita finds heart in her imagination and the picture poems her father taught her, but each day threatens to further tear her family apart. 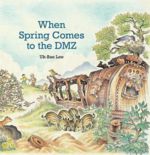 Grandfather returns each year to the demilitarized zone, the barrier–and accidental nature preserve–that separates families that live in North and South Korea.

One night they came… The darkness grew colder, deeper, darker, and swallowed up everything… Marwan is a young boy on a journey he never intended to take, bound for a place he doesn’t know. On his journey, he relies on courage and memories of his faraway homeland to buoy him. With him are hundreds and thousands of other human beings, crossing the deserts and the seas, fleeing war and hunger in search of safety. He must take one step after another—bringing whatever he can carry, holding on to dreams. This is the journey of one boy who longs for a home, and we follow his path, walking hand in hand with him as he looks forward with uncertainty and hopes for a peaceful future. This beautiful, heartfelt story gives a human face to the plight of refugees all over the world. Marwan’s journey is everyone’s journey.

Awarded the Caldecott Medal in 1941, They Were Strong and Good is a classic book that follows the path of one family’s journey through American history. Robert Lawson introduces us to his forefathers and with them we brave Caribbean storms, travel to the wharf markets of New York, and fight in the Civil War. Amidst these adventures Lawson’s grandparents meet, marry, and raise a family, and later his parents follow the same cycle of life. But this book is more than just the story of one family, it’s a social history of our country.

Intrigue and danger weave a web around young Consuelo as she is thrust into a new life in unfamiliar surroundings and a real life mystery that begs to be resolved.