Just one year ago, Neryn had nothing but a canny skill she barely understood and a faint dream that the legendary rebel base of Shadowfell might be real. Now she is the rebels’ secret weapon, and their greatest hope for survival, in the fast-approaching ambush of King Keldec at Summerfort. The fate of Alban itself is in her hands. But to be ready for the bloody battle that lies ahead, Neryn must first seek out two more fey Guardians to receive their tutelage. Meanwhile, her beloved, Flint, has been pushed to his breaking point as a spy in the king’s court—and is arousing suspicion in all the wrong quarters. At stake lies freedom for the people of Alban, a life free from hiding for the Good Folk—and a chance for Flint and Neryn to finally be together.

They’re known as Firestarters. Boomers. Skychangers. The government calls them Illegals — children with inexplicable abilities — and detains them in menacing facilities so that society is kept out of harm’s way. Ashala Wolf and her Tribe of fellow Illegals have taken refuge in the Firstwood, a forest eerily conscious of its inhabitants, where they do their best to survive and where they are free to practice their abilities. But when Ashala is compelled to venture outside her territory, she is betrayed by a friend and captured by an enemy. Injured and vulnerable, with her own Sleepwalker ability blocked, Ashala is forced to succumb to a machine that will pull secrets from her mind. It’s only a matter of time before the machine ferrets out the location of the Tribe. Her betrayer, Justin Connor, is ever-present, saving her life when she wishes to die and watching her every move. 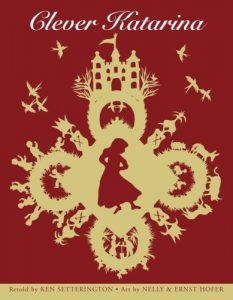 In the grand tradition of fairy tales, clever and beautiful Katarina must solve the king’s riddle in order to become queen, or risk her dear father going to prison. She must get to the castle — not clothed, yet not naked; not riding, yet not walking; not on the road, yet not off the road. Will kindhearted Katarina be able to solve the riddle and save her father from his fate?Renowned storyteller Ken Setterington has borrowed from European folk traditions to tell an enchanting story of a young girl — intelligent, observant, and pure of heart — whose sensitivity and acumen saves the day. Nelly and Ernst Hofer’s delicate cut-paper art of scherenschnitt makes this storybook an exquisite addition to any collection.

Action—a stunning magic system—swordplay galore! Eon has been studying the ancient art of Dragon Magic for four years, hoping he’ll be able to apprentice to one of the twelve energy dragons of good fortune. But he also has a dark secret. He is actually Eona, a sixteen-year-old girl who has been living a dangerous lie for the chance to become a Dragoneye, the human link to an energy dragon’s power. It is forbidden for females to practice the Dragon Magic and, if discovered, Eon faces a terrible death. After a dazzling sword ceremony, Eon’s affinity with the twelve dragons catapults him into the treacherous world of the Imperial court where he makes a powerful enemy, Lord Ido. As tension builds and Eon’s desperate lie comes to light, readers won’t be able to stop turning the pages …