Mike Fink, the larger-than-life hero of one of America’s favorite tall tales, was the most daring and rugged frontiersman on any American river. A runaway at two days old, Mike eventually grew up to be King of the Keelboatmen–the strong, rowdy men who floated cargo downriver to New Orleans and poled their heavy boats back against the current. But first he became a crackerjack marksman with his gun, Bang All, then grappled with grizzlies, and defeated Jack Carpenter, the reigning Keelboat King, in an epic wrestling match. No man, alligator, or snapping turtle could outdo the mighty Mike Fink-that is, until Hilton P. Blathersby and his powerful smoke-spewing steamboat came along! In zesty prose and exuberant, richly colored pictures, Steven Kellogg captures all the fun and adventure of America’s most famous ring-tailed roarer and river wrestler.

When the famous wrestler Forever Mountain tickles a plump little girl, the consequence is that he must be trained by her, her mother, and her grandmother.

Along with other amazing feats, Angelica Longrider, also known as Swamp Angel, wrestles a huge bear, known as Thundering Tarnation, to save the winter supplies of the settlers in Tennessee.

Sally Ann, wife of Davy Crockett, fears nothing–and proves it when braggart Mike Fink tries to scare her. On the day she is born this amazing baby proudly announces she can out-talk, out-grin, out-scream, out-swim, and out-run any baby in Kentucky. Within a few years Sally is off to the frontier, where she stuns a hungry grizzly bear, makes a lasso out of six rattlesnakes, and is more than a match for the mighty Mike Fink. And when Sally Ann rescues Davy Crockett from a pair of ferocious eagles, even her hornet’s-nest bonnet and skunk perfume don’t stop him from proposing marriage. You won’t find Sally Ann in any history book, but that hasn’t kept her from becoming an authentic American frontier legend and the unforgettable heroine of Steven Kellogg’s most delightfully rip-roaring tall tale.

Incidents from the life of Pecos Bill, from his childhood among the coyotes to his unusual wedding day. 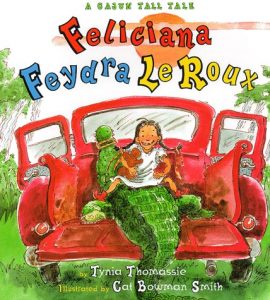 Even though Feliciana is her grandfather’s favorite, he refuses to allow her to go alligator hunting with him, so one night she sneaks out and surreptitiously joins the hunt anyway.

When a huge white whale gets stuck between the banks of the Mississippi River causing the water to stop flowing, Jean Laffite finds a way to get the river moving again.

When Papa Alonzo Leatherby’s tall tales about New England freeze solid one extra cold winter, they have to be thawed out and preserved in ingenious ways.