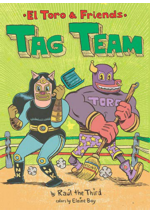 After last night’s match, the stadium is a mess! There is so much work to be done and Mexican wrestling star El Toro feels overwhelmed. Enter . . . La Oink Oink! With the collaborative spirit they have in the ring, El Toro and La Oink Oink tackle the cleaning up together. La Oink Oink sweeps and El Toro picks up the trash. La Oink Oink washes the dishes, and El Toro dries them.

A stray kitty gets a job in a sumo stable, chasing mice in exchange for food. But when eating like a sumo wrestler slows our feline hero down, he realizes he must train like a wrestler, too. Through hard work and perseverance–and with a little help from a big buddy–SumoKitty is born! A funny and heartwarming story inspired by the Japanese saying “Fall down seven times, stand up eight.” 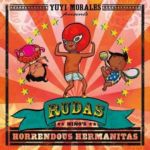 No opponent is too big a challenge for the cunning skills of Las Hermanitas, Lucha Queens! Their Poopy Bomb Blowout will knock em’ down! Their Tag-Team Teething will gnaw opponents down to a pulp! Their Pampered Plunder Diversion will fell even the most determined competitor!

Max seems like any other kid until he is asked to join the Lucha Libre Club, but because of strict secrecy he cannot tell anyone of his royal wrestling blood, his uncle the king of lucha libre, The Guardian Angel.

Sumo Boy saves a girl from a bully using real sumo wrestling moves. When he hears a little girl’s cry of despair, he jumps to the rescue. 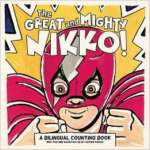 Nikko’s mother wants him to stop jumping on his bed, but he’s not jumping on his bed, as he tried to convince her. Instead there are luchadors, masked wrestlers, trying to fight him one at a time. In the end, of course, Nikko is the winner: the great and mightly Nikko!

Andre Roussimoff is known as both the lovable giant in The Princess Bride and a heroic pro-wrestling figure. He was a normal guy who’d been dealt an extraordinary hand in life. At his peak, he weighed 500 pounds and stood nearly seven and a half feet tall. But the huge stature that made his fame also signed his death warrant. Box Brown brings his great talents as a cartoonist and biographer to this phenomenal new graphic novel. Drawing from historical records about Andre’s life as well as a wealth of anecdotes from his colleagues in the wrestling world, including Hulk Hogan, and his film co-stars (Billy Crystal, Robin Wright, Mandy Patinkin, etc), Brown has created in Andre the Giant, the first substantive biography of one of the twentieth century’s most recognizable figures.

When the famous wrestler Forever Mountain tickles a plump little girl, the consequence is that he must be trained by her, her mother, and her grandmother.

Everybody is fighting in sixth-grader Maximilian’s world as his elderly aunts battle for the Queen Bingo trophy, his masked uncles wrestle for the tag-team title of the world, and his sweetheart and the “new girl” battle for Max’s heart.