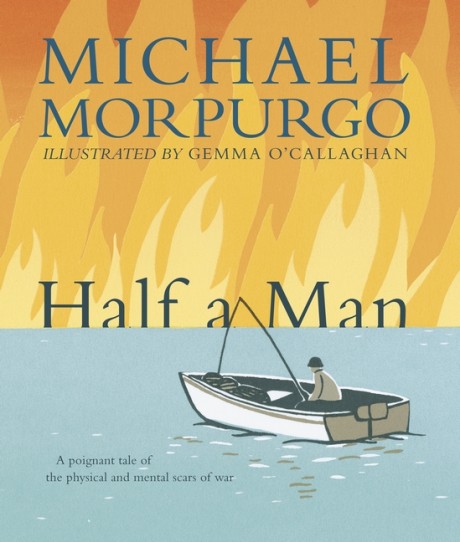 Michael’s grandfather comes to visit his family in London from his home in the Scilly Isles once every few years. However, it is not the rarity of his visits that causes the most stress, but his physical appearance, which causes everyone to be “on eggshells.” Michael’s grandfather was burned badly and lost most of both hands when his ship was torpedoed and sank during WWII. Despite the severity of the injuries, no one really knows the story of what caused them. All Michael knows is that he is not supposed to look at his grandfather and staring is definitely not allowed. Yet Michael cannot help but engage with his grandfather. From the first sentence, readers are drawn into seven-year-old Michael’s thoughts as he reflects on growing up with a rather unusual, somewhat taciturn, alienated grandfather.

As the story progresses, Michael’s relationship with his grandfather grows. When he is 12 years old, Michael begins visiting his grandfather in Bryher during summer breaks. Over the next six years, Michael gains an appreciation for his grandfather and the rural isles of his grandfather’s home. Michael has always been able to see past the scars, and that ability helps heal the emotional scars, as well. By the end of the story, Michael learns why he never knew his grandmother, what truly happened to his grandfather, the realities of coming home injured from war, and, most of all, that his grandfather is much more than half a man.

This book would be perfect for young adults ages 10 and up. While the story is a quick and easy read, the ideas within the book are deep and meaningful. This book could easily be used as an introduction to wartime poetry or literature. You could pair this book with any number of war movies or clips like The Hurt Locker (2008) or The Best Years of Our Lives (1946). One movie to pair this with for older students is The Man Without a Face (1993) starring Mel Gibson. You could combine one of those movies and this young adult book with The Odyssey by Homer or Corlianus by Shakespeare to create a unit on returning home from war or the physical and psychological toll of war. You could invite students into discussions or Socratic seminars about PTSD, the hardships of returning to “normal” life and the lasting effects war has on not only the soldier, but everyone he encounters. Linking this book to a novel like The Impossible Knife of Memory (2014) by Laurie Halse Anderson or even books like Catching Fire (2009) or Mockingjay (2010) by Suzanne Collins could allow for greater discussion and more connections when dealing with characters struggling with PTSD and the emotional, psychological, and physical fallout of war.

Michael Morpurgo is a master storyteller and from the first line, readers are reminded of his talent to engage others in his stories. Growing up in England, the son of a soldier and a soldier himself, and having done his own research and interviewing soldiers for his masterpiece War Horse (1982), Morpurgo definitely has insight into the sadness that one can experience when coming home from the front. Morpurgo weaves a tale that starts with a boy at the age of 7 and follows his life and progression of understanding through high school graduation. Contrasting the life of a boy in London with that of a grandfather in a rural town is genius, and Morpurgo, being from England and having spent a majority of his life in both city and rural settings, uses the contrast to add to the authenticity of the story.

Michael Morpurgo lives in Devon, England with his wife Clare. He has written over 140 books and has just completed a new book called Toto (2017), which is a new take on the story of The Wizard of Oz. He is best known for his novel War Horse (1982), which became a Broadway play and a major motion picture. You can learn more about him at his website: https://www.michaelmorpurgo.com.

The illustrator, Gemma O’Callaghan, lives in Nottingham, England with her husband Paul. She is rather new to the young adult novel scene and this book represents her most notable experience in the young adult literature field as an illustrator. You can read more about her and see more of her artwork at her website: http://www.gemma-ocallaghan.co.uk. Her illustrations are simple, beautiful, and create just the right sense of imagery, inviting reader to connect to their memories on the page. She does a phenomenal job of never starkly revealing the grandfather’s injuries, because that is not what the story is about. While we read about his injuries and hear of how awful they are, O’Callaghan never gives in to the temptation to show them to us, but rather she lets our imagination take us there. The varying use of perspective and color makes a great story by Morpurgo complete.