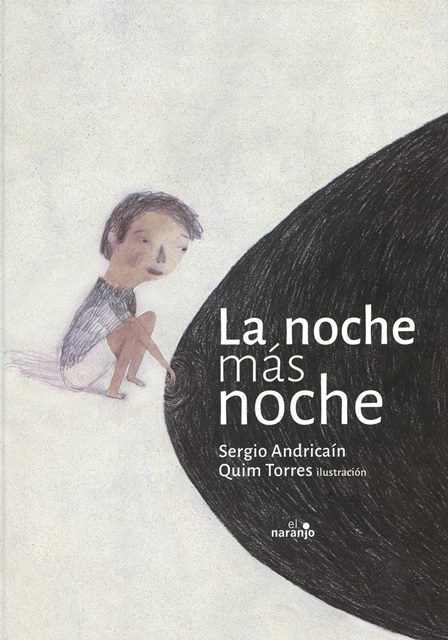 The main character hears his parents whispering to hide the fact that they must leave home because of hardships. Soon, his maternal grandmother arrives to join in the private conversation. His father and then his mother tell him about a journey they must take, leaving their home. It is a dark night when he and his parents cross the sea like many other migrants. They travel in his father’s fishing boat and face difficulties as they sail the seas. They arrive but unfortunately, like many journeys traveled before this one, not all family members survive.

La noche más noche touches on the social world crisis of immigration and serves as a tribute to the hundreds of thousands of families who have left behind their homes and traveled in search of a hopeful future. The book is dedicated “A todos los que han dejado atras su pais guiados por la brujula de la esperanza/For those that have left home guided only by the compass of hope.” The book is only available in Spanish and is published in Mexico. The author was inspired to write this book as he traveled by boat and glanced out into the massive sea. He remembered how scared he felt even though he was safe on his boat. He could not imagine all the migrants who travel the lonely, dangerous, dark, and never-ending sea. He wrote this book for all those migrants that take this journey and travel with hope in their hearts.

The beautiful illustrations and text do an amazing job describing the struggle of a child trying to process what is entailed in embarking on this lifetime journey. Readers connect to the main character through the first-person narration as he walks them through his experiences. The front cover depicts the main character by himself. The front endpapers have a single illustration of a boat on blank blue and cream-colored papers. The back endpapers are the same illustration except instead of blue, they are black and cream-colored papers. All of the other illustrations fill the page spread, inviting readers into the main character’s life and journey. The minimal color choice and visual art media texture also aids in this. Quim Torres does not disclose the art materials used for this book, however, it looks like he utilized charcoal, color pastels, color pencils and ink.

La noche más noche can be paired with books about personal immigration journeys involving hope for a better life, escaping a war zone, and other reasons that make people willing to leave their homes. These books include La Frontera: El viaje con Papá/ My Journey with Papá, by Deborah Mills (2018) and A Story like the Wind by Gill Lewis (2017). This book can also be paired with books like Pancho Rabbit and the Coyote by Duncan Tonatiuh (2013) and The Journey by Francesca Sanna (2016).

The author, Sergio Andricaín, was born in 1959 in Havana, Cuba. He has published over 19 picturebooks and more than 10 research studies. Several of his books were selected for the Tejas Star List in 2020-2021. He started a nonprofit called Fundación Cuatrogatos with Antonio Orlando Rodríguez in Miami, Florida. The foundation promotes educational projects, cultural projects, and Spanish-language reading. He has been the director of his nonprofit since 2012 and currently resides in Miami, Florida. For more information see Sergio’s blog; also see the foundation’s webpage.

WOW Review, Volume XIII, Issue 4 by Worlds of Words is licensed under a Creative Commons Attribution-NonCommercial-ShareAlike 4.0 International License. Based on work by Nallely Aguayo at https://wowlit.org/on-line-publications/review/xiii-4/8/