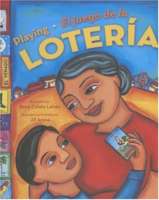 A boy has a good time attending a fair with his grandmother in San Luis de La Paz, Mexico, as she teaches him Spanish words and phrases and he teaches her English.