A timeless exploration of high-stakes romance, self-discovery, and the lengths we go to love and be loved.

Arturo and his grandmother return in this charming bilingual sequel. Abue Rosa and Arturo are making a welcome dinner for Tia Ines’ new fiancé using plaintains, pollo, and pastel. With a bit of creativity, Arturo takes charge and creates a welcome feast like no other. Charming illustrations infused with the colors of the Southwest bring this touching story to life. A glossary at the end provides explanations and pronunciation for key words. 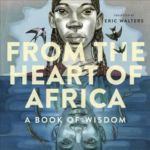 A collection of African wisdom gorgeously illustrated by artists from Ghana, South Africa, Zimbabwe, Canada, the United States and more.

Eleanor and Park meets Bollywood in this hilarious and heartfelt novel about two Indian-American teens whose parents conspire to arrange their marriage. Dimple Shah has it all figured out. With graduation behind her, she’s more than ready for a break from her family, from Mamma’s inexplicable obsession with her finding the “Ideal Indian Husband.” Ugh. Dimple knows they must respect her principles on some level, though. If they truly believed she needed a husband right now, they wouldn’t have paid for her to attend a summer program for aspiring web developers… right? Rishi Patel is a hopeless romantic. So when his parents tell him that his future wife will be attending the same summer program as him—wherein he’ll have to woo her—he’s totally on board. Because as silly as it sounds to most people in his life, Rishi wants to be arranged, believes in the power of tradition, stability, and being a part of something much bigger than himself. The Shahs and Patels didn’t mean to start turning the wheels on this “suggested arrangement” so early in their children’s lives, but when they noticed them both gravitate toward the same summer program, they figured, Why not?

Featured in WOW Currents (February, 2018) around the theme of women in STEM.

Two perspectives were offered in My Take/Your Take (March, 2018).

The northern lights shine, women gather to eat raw caribou meat and everyone could be family in this ode to small-town life in Nunavut, written in English and Inuktitut. Sisters Angnakuluk Friesen and Ippiksaut Friesen collaborate on this story about what it’s like to grow up in an Inuit community in Nunavut. Every line about the hometown in this book will have readers thinking about what makes their own hometowns unique. With strong social studies curriculum connections, Only in My Hometown introduces young readers to life in the Canadian North, as well as the Inuit language and culture.

Nag Tai Korero means the currents of speech, a reference to the Maori tradition of oral storytelling. This book retells in simple form fourteen Maori stories and myths that have been passed down over centuries.

This collection of Hindu folktales for middle readers features stories about the god, Ganesha, who is easily recognized because of his elephant head. Krishnaswami introduces the stories by recalling her own introduction to Ganesha and goes on to offer a mythological context for the tales. Included among the tales are Ganesha’s Head, The Broken Tusk, and ‘Why Ganesha Never Married.

Tata Gus teaches his grandson Aaron how to use natural healing remedies, and in the process helps the members of his family and his neighbors.

It’s Christmas Eve, and you’re invited to a Nochebuena celebration! Follow a family as they prepare to host a night filled with laughter, love, and Latino tradition. Make tasty tamales and hang colorful adornos (decorations) on the walls. Gather to sing festive canciones (songs) while sipping champurrado (hot chocolate). After the midnight feast has been served and the last gifts have been unwrapped, it’s time to cheer, “Feliz Navidad and to all a good night!” Latin American traditions for celebrating Christmas Eve in a text that combines English and Spanish words and follows the rhythm of Clement Moore’s “The Night Before Christmas”.

When the great god Shao promises Tiger nine cubs each year, Bird comes up with a clever trick to prevent the land from being overrun by tigers.