Seaman, Meriwether Lewis’s Newfoundland dog, describes Lewis and Clark’s expedition, which he accompanied from St. Louis to the Pacific Ocean.

An introduction to the lives of Meriwether Lewis and William Clark includes information on the exploratory expedition they led from St. Louis to the Pacific Ocean in the early nineteenth century. 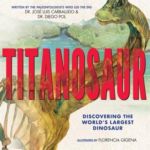 Through a combination of photographs and illustrations, this picture book will tell the story of the discovery of this new dinosaur, while weaving in exciting facts about what life was like for this brand new species that doesn’t even have an official name yet! Chock-full of back matter like a glossary, a dinosaur time period chart, and a gatefold and/or inside jacket poster of the Titanosaur cast, kids of all ages will devour this book. Additionally, it will be vetted and approved by the specialists at the museum as the ultimate, official Titanosaur book.

Teenaged best friends Tianyi and Kai journey deep below a mountain range, where ancient tombs are certain to contain riches but are rumored to be guarded by merciless supernatural forces.

Twins Chirri and Chirra venture underground to explore a hole that has appeared in their basement wall and there encounter all manner of creatures and delights.