Miriam Makeba, a Grammy Award–winning South African singer, rose to fame in the hearts of her people at the pinnacle of apartheid―a brutal system of segregation similar to American Jim Crow laws. Mama Africa, as they called her, raised her voice to help combat these injustices at jazz clubs in Johannesburg; in exile, at a rally beside Dr. Martin Luther King, Jr.; and before the United Nations. 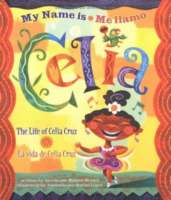 An exuberant picture-book biography of the Cuban-born salsa singer. From its rhythmic opening, the first-person narrative dances readers through Cruz’s youth in Havana, a childhood bounded by scents of nature and home, the sweet taste of sugar, and the sound of music. A singer from an early age, Cruz sang so continually that one of her teachers finally urged her to share her voice with the world. Thus encouraged, she entered competitions, undeterred when her racial heritage prevented her from competing – undeterred, even, when the advent of Castro’s communist regime forced her to leave Cuba as a refugee. Positive even in exile, Cruz made New York City her own and took Miami by storm. The salsa-influenced prose presented in English and in Spanish is followed by a straightforward vita of the singer, noting her death in July 2003. Lopez’s distinguished, luminous acrylic paintings are alive with motion, lush with brilliantly layered colors, and informed with verve and symbolism. This is a brilliant introduction to a significant woman and her music. The only enhancement required is the music itself.

In the Chinese opera, men traditionally sing both male and female parts. Wei Lim’s father, Ba, however, usually plays masculine characters and sings in a deep bass voice. But Wei’s grandfather played female roles, and has secretly taught Wei to sing these difficult parts. When the New World’s entertainments begin to cause a shrinking audience for the opera company, Ba is forced to play female characters.

Illustrations and rhythmic text celebrate the life and music of singer Celia Cruz, as a young fan attends a neighborhood dance party and hears loss, happiness, Latin American culture, and more in her voice and lyrics.