In southeastern Nigeria, twelve-year-old Mnamdi is determined to avenge his police chief father, who was murdered while triyng to rid the town of criminals, but Nnamdi feels powerless until he receives a magical object which gives him superpowers.

With help from his recently-deceased grandfather, new friends and their superhero alter egos, and some paint, Rusty stops the bullies who have been terrorizing their small town. 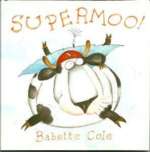 Operating out of their Cowcave headquarters, Supermoo, a superheroine Holstein, and her trusty sidekick, Calf Crypton, battle the evil forces of pollution that are out to destroy the world.

Sixteen-year-old Tom Harvey was an ordinary Londoner until an attack that caused fragments of an iPhone to be embedded in his brain, giving him incredible knowledge and power, but using that power against the gang that attacked him and a friend could have deadly consequences.

They’d done it. Not only had Roz, Abby, Lance, and Thunder survived their first battle with a super villain, they’d defeated him. Krodin was dead, and they had saved the world. Now everything could go back to normal-good old, boring normal. School. Parents. Friends. But three weeks later, the world suddenly changes. The United States is under martial law, the people are little more than drones, and where Central Park should be there now stands a massive glass-and-steel building, home to the all-powerful Chancellor.

A boastful strong man learns a lesson harder than his muscles when he encounters one of Nigeria’s superheroes in this Hausa tale which explains the origin of thunder.

Pupils and staff at HIVE are horrified to discover that Dr Nero has been captured by the forces of HOPE, the Hostile Operative Prosecution Executive, the world’s newest and most ruthlessly efficient security force. Three months pass without any news of his fate, and Number One has decided to appoint a sinister new headmistress for the school, somebody that the pupils and staff had thought that they’d seen the last of. Meanwhile Otto is also struggling to cope with new abilities that are starting to manifest themselves; can he really be unconsciously interfacing with computers without physical contact? And if he is, what exactly do these new powers really mean? The only way to find Nero and the truth behind the lies is to escape HIVE. Otto must get out, and take the risks which come with being a rogue agent. Then he just has to break into MI6…..

It has been ten years since the great battle that wiped out all the superhumans. Whether they all died that day or simply lost their powers and blended back into society, only one thing is certain: They are gone. Or are they? Thirteen-year-olds Danny and Colin have recently begun changing. How can they explain Danny’s newfound ability to move at the speed of light, or Colin’s surprising strength? They can’t, but their parents—the lost generation of superhumans—can. They have been watching and waiting for these changes. So have others—and not everyone is happy about the boys’ new powers. Some will do anything to stop them. 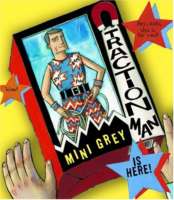 Traction Man—wearing combat boots, battle pants, and his warfare shirt—comes in a box, but quickly finds the way into the imagination of his lucky new owner. This superhero searches for the Lost Wreck of the Sieve as the boy makes a game of doing the dishes, and later in the bathtub, he conquers the Mysterious Toes that are stealing his pet, the brave little Scrubbing Brush. Traction Man is ready for anything — until he meets up with his boy’s granny and the humiliating outfit she has knit for him.

Take a closer look at Traction Man Is Here! as examined in WOW Review. 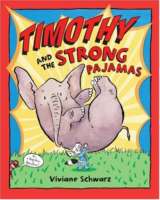 Every night, Timothy tries to make himself stronger. He drinks milk. He exercises. He thinks STRONG thoughts all with the help of his faithful stuffed monkey. Then his mother fixes up his holey, missing-button favorite pajamas, and suddenly Timothy has super strength! He catches an elephant falling off a cliff! He rescues a princess in a tipping tower! He drags an alligator back to the zoo! But when Monkey gets trapped and the pajamas rip! Timothy finds his real power in his friends.