Sofia isn’t so sure about Fright Night. When she suggested it to her friends, she was only thinking of it as an excuse to get closer to Dylan. Now that it’s happening, she’s worried that spending the night in a deserted forest is a bad idea. But it’s totally safe–there’s even a safe word if things get too intense. And they do. Sofia and her friends are forced to face their greatest fears, and suddenly? It’s too late to turn back.

Pete the badger likes everything to be neat and tidy at all times, but what starts as the collecting of one fallen leaf escalates quickly and ends with the complete destruction of the forest.

On his way home through the woods, Mouse hears a loud AAA-OOO! He thinks it’s Owl, and Owl thinks it’s Mouse. Bear grumbles, “Which one of you made that awful AAA-OOO?” Then Moose, Duck, and other animals hear it, too, and they’re all afraid. Could it be a monster making that terrible noise?

When a young girl named Kikko realizes her father has forgotten the pie he was supposed to bring to Grandma’s house, she offers to try and catch him as he makes his way through the woods. She hurriedly follows her father’s footprints in the snow and happens upon a large house she has never seen before. Curious, Kikko peers through the window, when she is startled by a small lamb wearing a coat and carrying a purse. Even more surprising, the lamb speaks, asking her in a kind voice, Are you here for the tea party? Suddenly, Kikko realizes her trip through the woods has turned into something magical. 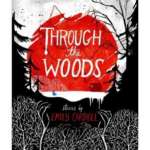 Journey through the woods in this sinister, compellingly spooky collection that features four brand-new stories and one phenomenally popular tale in print for the first time. These are fairy tales gone seriously wrong, where you can travel to “Our Neighbor’s House”—though coming back might be a problem. Or find yourself a young bride in a house that holds a terrible secret in “A Lady’s Hands Are Cold.” You might try to figure out what is haunting “My Friend Janna,” or discover that your brother’s fiancée may not be what she seems in “The Nesting Place.” And of course you must revisit the horror of “His Face All Red,” the breakout webcomic hit that has been gorgeously translated to the printed page.

One a quiet day, when the wind was still, the creek could be heard all the way up to where the old beech stood.  Under its branches, cats would come to dream and be dreamed.  Black cats and calicos, white cats and marmalade ones, too.  But they hadn’t yet gathered the day the orphan girl fell asleep among its roots, nestling in the weeds and long grass like the gangly, tousle-haired girl she was.  Her names was Lillian.

Lillian is an orphan who lives with her aunt on a homested miles from anyone, surrounded by uncharted forest.  She wanders the woods, chasing after squirrels and rabbits and climbing trees like a possum.  Free-spirited and independent, Lillian is kindard soul to the many wild cats who gather around the ancient beech tree.  One day, while she is under the beech, Lillian is bitten by a poisonous snake.  The cats refuse to let her die, and use their magic to turn her into one of their own.  How she becomes a girl again is a lyrical, original folklore that begs to be read aloud.  Set in the hill country outside of the author’s fictional city of Newford, A Circle of Cats is the much anticipated first picture book by longtime friends Charles de Lint and Charles Vess, whose art is as magical as the story.