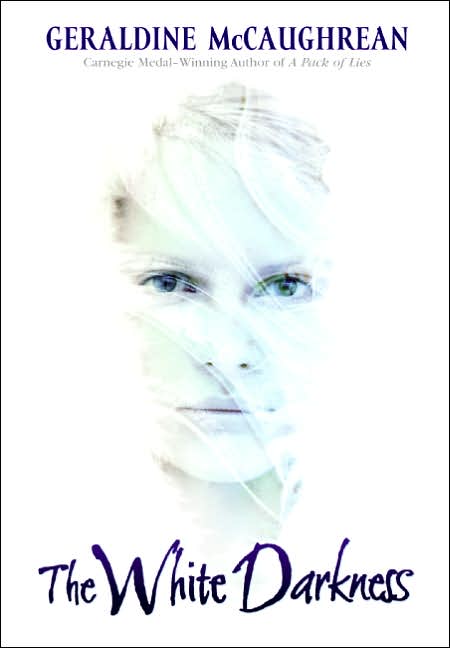 “God sketched Antarctica, then erased most of it again, in the hope a better idea would strike Him.  At the center is a blank whiteness where the planet isn’t finished. It’s the address for Nowhere.” (p. 74)

This realistic fiction novel focuses on Sym, a fourteen-year-old girl obsessed with Antarctica and the doomed Scott expedition of 1910. Like the quote that describes Sym’s first impression of “The Ice,” Sym feels a strong connection to the seemingly vacant geography that mirrors her identity. Dealing with the untimely death of her father, the lack of peer acceptance, and a hearing impairment that accentuates her self-consciousness, Sym engages in a make-believe relationship with Captain Lawrence Oates, a.k.a. Titus, a member of the Scott expedition whose good looks and legendary valor had captured Sym’s imagination. Sym’s Uncle Victor, a family friend who has become a surrogate father, takes Sym to Antarctica on an unexpected expedition. From the beginning, the reader knows the quirky Uncle Victor has secret motives for this eco-adventure. Obsessed with discovering a geographic marvel, he jeopardizes Sym and their fellow travelers’ lives, and Sym finds herself on a dangerous journey of survival. The inner voice of Titus, which Sym has deemed imaginary, turns out to be her own as she discovers her inner strength and determination. The discovery of unknown personal territory is brilliantly juxtaposed with her uncle’s obsession with making history at all costs.

British-born author Geraldine McClaughrean is a master of the written word, and presents the reader with a riveting story of mystery, suspense, adventure, and unpredictable plot twists. A novel about a young English girl who talks to a dead explorer may seem like a strange premise, but it all makes complete sense in this adventure of courage and intrigue. It is no wonder this novel was awarded the prestigious Prinze medal by the American Library Association for outstanding young adult literature. It was originally published in England by Oxford University Press.

If part of the goal of reading literature about children and adolescents from other parts of the world is to simultaneously invite explorations of cultural differences and understandings of common dreams and value, this book can invite provocative discussions about journeys of discovery undertaken by characters across cultures in books, such as La Línea (Ana Jaramillo, 2006). Furthermore, it can be a springboard for inquiries into the perilous sacrifices individuals in literature and history have made when obsessed in the spirit of exploration and discovery. This book could be paired with adventure stories like Julie of the Wolves by Jean Craighead George (1972), Hatchet by Gary Paulsen (1987), Into Thin Air by Jon Krakauer (1997), or Touching Spirit Bear by Ben Mikaelson (2001). It could also be included in a text set of coming of age stories like Speak by Laurie Halse Anderson (1999), Esperanza Rising by Pam Munoz Ryan (2000), or Keeper of the Night, Kimberly Willis Holt (2003).