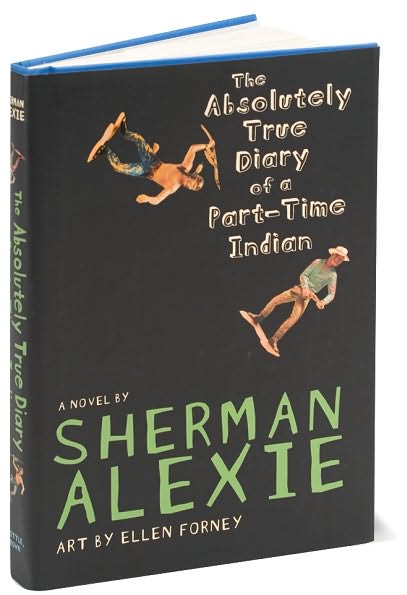 “I realized that I might be a lonely Indian boy, but I was not alone in my loneliness. There were millions of other Americans who had left their birthplaces in search of a dream.” (p. 217)

From Wellpinit, on the Spokane Indian Reservation in Eastern Washington, to Reardon, Washington, Arnold Spirit “Junior” must negotiate the geographical and psychological distances that exist between his Indian and White worlds. Born on the rez with a series of medical problems, Junior eventually recognizes that he has to leave the reservation to preserve his dreams for the future. His hope is not in a reservation school that has books twenty years older than he is, and he doesn’t have hope in a system that will allow students to languish when they could thrive. Junior decides to leave the reservation for Reardon, a school over twenty miles away and a psychological distance that is much longer. It is his cross-cultural experiences and Junior’s cross-cultural identity that drive this story.

Told as a first person account, this piece of autobiographical fiction holds the reader’s interest through both humor and horror. As the character Junior negotiates what it means to be an Indian away from the reservation and an Indian who has decided to leave the rez, or as some would suggest, to become “White,” the reader is presented with the inequities that frequent reservations across the United States. Alexie creates such a strong narrative that many middle and high school students will be compelled to explore more about how such inequities can exist in school systems. The text reads quickly, chapters are driven by dialogue, and the prose is well written and accessible to young adult readers. The novel is more than storytelling–readers are drawn into the storyline and find themselves hoping that Junior will be able to work through his situation. And while Junior is a truly likable character, his situation is a stunning example of injustice laced with courage, hope, and truth. Alexie holds no punches, yet each is delivered with compassion and humor. A remarkable piece of literature, True Diary will stay with readers long after the last page is turned.

Based on incidents from the author’s own life, The Absolutely True Diary of a Part-time Indian is a blending of the author’s memories and experiences growing up as a Spokane Indian. It is the author’s first text to address a younger adolescent audience, but could serve as entrée into his other texts including The Lone Ranger and Tonto Fistfight in Heaven (Sherman Alexie, 2005). Coupling this text with other pieces of fiction for a unit on issues of identity and cross cultural existence could include The Skin I’m In (Sharon Flake, 2000) and When I Was Puerto Rican (Esmeralda Santiago, 2006).