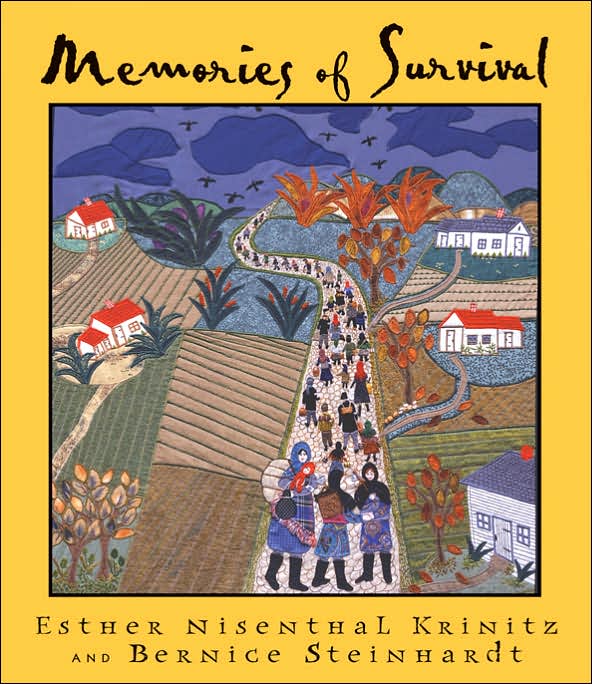 Many stories of the Holocaust exist in literature for all ages, often leaving life-time impressions of the horrors of war and the memories of those whose families were destroyed. Told simplistically in words but with the detailed creativity of needlework, Memories of Survival will remain both an easily understood yet complex retelling of one family’s experiences.

Separated from their family at the age of 15, Esther and her sister went into hiding with friends and later posed as Catholic farm hands. The book is told through embroidered panels, Esther’s words as found on each panel, and an added narrative by her daughter, Bernice. Esther created 36 pictures before her death after beginning this series at the age of 50, and they are organized into sections just as chapters within a book. These sections tell her story from a peaceful family existence, through survival of the Holocaust, to her journey to the United States as an adult. Her daughter’s words provide just enough explanation to make the story continuous. Besides her own contributions to this book, Bernice’s dedication to this project is also evident in her role as a founder of Art and Remembrance, a nonprofit educational organization dedicated to using the power of story and art to illuminate the effects of war, intolerance, and social injustice.

The voice heard here is clearly that of a Holocaust survivor – a voice of determination and bravery shared through visual images and words. The historical accuracy of her life journey can be traced through accounts and other survivor stories. The story is a tribute to the individuals and events of the happy times in her life as well as a reminder of the horrific experience of seeing her family taken away and discovering later that they have been killed. The images are quite detailed with style and color used to create landscape and faces as well as scenes of defiance and emotional moments. One can imagine the hours of rethinking these images that preceded and continued throughout the creation of this book. Her daughter’s comments maintain the authentic perspective with obvious personal insight and emotional involvement in this family story. These images join the chorus of voices striving to keep this memory alive and a reminder of those whose lives were forever changed through war and dictatorial leaders.

Readers of all ages can appreciate and connect readily to the human element of this story through its visual technique-that of using a comfortable needlework approach to tell a story in stark contrast to the comforts of home. This book can be grouped with other Holocaust stories told by those who experienced it, such as The Hidden Child (Isaac Millman, 2005), The Cat with the Yellow Star: Coming of Age in Terezin (Susan Rubin with Ela Weissberger, 2006), or I Will Plant You a Lilac Tree: A Memoir of a Schindler’s List Survivor (Laura Hillman, 2005). Memories of Survival might also be paired with books that show the arts as integral to coping within various situations, such as Hitler’s Canary (Sandi Toksvig, 2007) or The Harmonica (Tony Johnston, 2004).