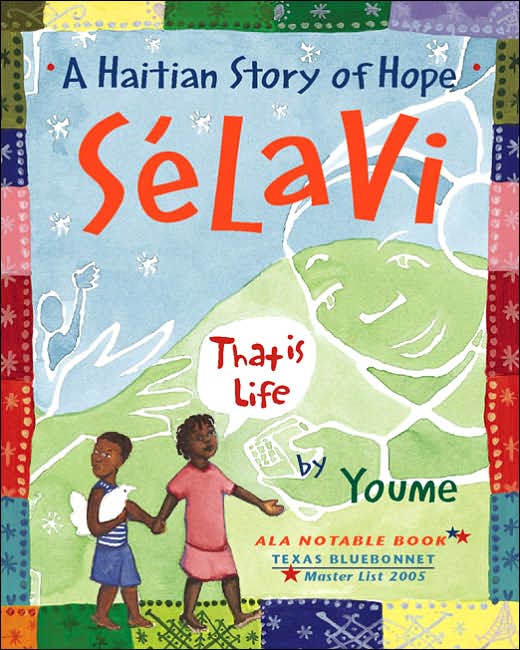 This true story is set in an orphanage in Port-Au-Prince, Haiti called Lafanmi Sélavi. The orphanage was opened in 1986 by a priest, Jean-Bertand Aristide, who later became president of Haiti. The picture book opens with a glimpse of the political violence that leaves a Haitian child homeless. “Not so long ago and not so far away, people with guns could take a family, burn a house and disappear, leaving a small child alone in the world.” Sélavi, whose name means “that is life,” roams the streets looking for food, shelter, and a family. He finds refuge near a local marketplace where he meets Tifré, Toussaint, Jenti, Espri, Yvette, and other children whose lives have also been affected by poverty, loss, and violence. These children become family to one another and other homeless children in Port-Au- Prince. Together, they help each other survive.

Although these small children experience homelessness and poverty, Landowne shows that children can be heroes and are able to solve their own problems. “I wanted to tell a story of a group of heroes…. Our country often focuses on the individual as a hero, but I was seeking a story with collective heroes, where the hero did not succeed on her or his own but in collaboration with others. The Haitian street children perfectly embody this idea” (www.netaid.org). The idea of collective heroes is effectively conveyed as the six homeless children form an allegiance and become a family committed to each other’s well being. They rise “early to look for work washing cars, carrying water, cleaning clothes, asking people for money or food,” and at the end of every day, they each come “home with something to share” so that there is food for everyone.

In addition to themes of unity and child heroes, other issues embedded in this book are hard work and ingenuity, values that strongly reflect the Haitian culture. It is quite common for children in Haiti to perform the kinds of daily chores mentioned even if they are not homeless. Landowne captures the resourcefulness of the Haitian people by showing how the children use a banyan tree as their home. This book also shows the benefits gained when adults support the efforts of children. After Sélavi and his friends are banned from their tree house by cruel officials, Sélavi seeks help from a church. He doesn’t just want help for himself, but seeks a place of refuge for himself and other homeless children. The church decides to be a “mighty river” and “build a house where street children who looked out for one another could live in safety, eat well, and even go to school.” Later, angry people set fire to the building, and the children are homeless again. The children stick together and eventually rebuild their home and establish a radio station where they can reach young people and speak out about their needs.

Landowne traveled to Port-au-Prince in 1997 and was invited to stay at the shelter described in the book. The illustrations capture life at the orphanage, as she recalls it, “festooned with colorful drawings of kids braiding hair, climbing tall banyan trees, and jump-roping” (netaid.org). Through the use of soft watercolors, she creates carefully sequenced illustrations, varied in scale and tone, to help tell the story. Photographs and lengthy endnotes from Landowne and Haitian-American author Edwidge Danticat provide valuable background and historical information. For older readers, adult writer Edwidge Danticat contributes a powerful essay about her own Haitian childhood, her country’s proud history, and its desperate upheaval.

This book is a culturally authentic piece of literature that offers children “a realistic view of children whose lives are sometimes disconcerting” (Wysocki, 2007). It is filled with moral concepts and messages for readers, another aspect of the Haitian culture. Most of the stories shared in Haiti are told to teach strong morals or life lessons. A companion to this book is A Taste of Salt: A Story of Modern Haiti by Frances Temple (1992). This novel is told from the perspective of an adolescent orphan who lived at the orphanage.

Landowne wrote this book to bring an understanding about Haiti and inspire others to do what they can to help (www.netaid.org). Her work serves as a voice for the homeless children in Haiti and provides other children around the world with a realistic view of life in Port-au-Prince, Haiti. The book is included in the 2005 ALA Notable Children’s Book List and the Texas Bluebonnet Award Master List.

Artist combines love of Haiti with lesson for all. Retrieved May 5, 2007, from http://www.netaid.org/inspiration/network-stories/youme_landowne.html