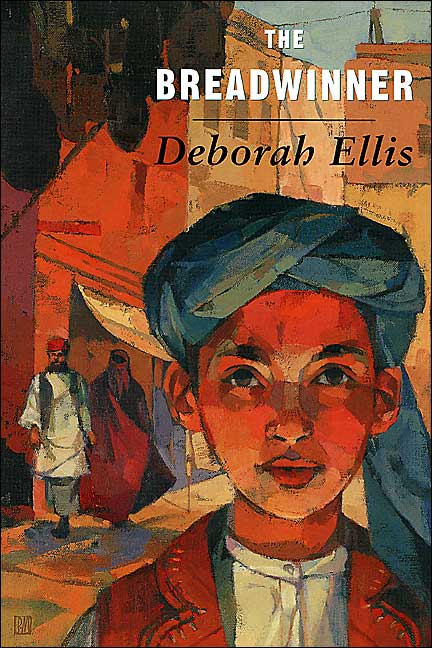 The Breadwinner, set in present day Afghanistan, is about a formerly wealthy family driven to poverty by the bombings and restrictions of the Taliban. The protagonist is an eleven-year-old girl whose Afghan father has been arrested and who decides to cut her hair and dress as a boy in order to support her remaining family. The Taliban have taken over Kabul and set curfews that require everyone to be indoors at night. Men are forced to grow beards and women and girls are forced to quit their jobs and school and stay indoors. If women go outdoors they must be accompanied by a man and wear a burqa, a covering for the entire body. Even their eyes must be behind a thick screen and girls are ordered to wear a chador, a cloth covering their heads and shoulders. Young teen age girls are often forced into arranged marriages to strangers. Harsh punishments of amputation are carried out in public stadiums for those accused of theft. Mere survival is the way of life, while a few manage to escape to Pakistan.

This starkly realistic, emotional story is the first of four connected novels written by Deborah Ellis, a political activist. Shortly after the Taliban takeover in Kabul in 1996 she began raising money for women in refugee camps. Eventually she went to the camps and the detailed images in her books are the result of her interactions with women in the camps. She interviewed them about their lives in the camps and before the war, originally planning to write a book for adults. Ellis met a woman in the camp whose young daughter was still in Afghanistan pretending to be a boy to work and support her family. The idea was sparked and Ellis knew she had to write a children’s book inspired by this girl. Unsure in the beginning as to whether children would understand the book, she was pleased to hear from those using her book how hungry children are to learn about the world and the lives of other children. The courage, hope and resiliency of the Afghan children in this book are an inspiration to all children. In an interview with Andrea Maxworthy O’Brien for CCBC Ellis states, “They are capable of understanding very complex things that are happening in the world and they are hungry for it as well.”

After The Breadwinner, Ellis wrote three more books as she continued to bring the face of the reality for Afghan children to other children in the world. Her books have been translated into seventeen languages. Her books share a compassion and admiration of children who must assume so much responsibility at such a young age. The other books that followed The Breadwinner are Parvana’s Journey, and Mud City. These titles provide further insights and discussion for readers around a global situation that continues to be in the forefront of the news. The hope and resiliency of children as seen in these stories may also be compared to that of other novels such as Under the Persimmon Tree by Suzanne Fisher Staples (2005) and Tasting the Sky: A Palestinian Childhood by Ibtisam Barakat (2007). Ellis also has written a book for adults based on her experiences in the camps, Women of the Afghan War. During her experiences in Afghanistan Ellis met many women and heard their stories while she herself lived in fear of car bombings, robberies and attacks. Her compassion for these women and girls has led to her writing in hopes that the world will know and understand what these women must endure.

All the royalties from the book The Breadwinner are donated to Women for Women in Afghanistan in a special effort to ensure education for the girls in refugee camps in Pakistan.

O’Brien, Andrea Maxworthy. The Power of One Voice [Electronic Version]. CCBC A Library of the School of Education, retrieved on 10/10/2008