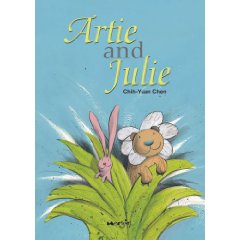 Artie, a young lion, lives in a hill with his mother and father who tell him that he will grow to be a ferocious lion. One day, Artie’s father says that he is old enough to find food (i.e., delicious rabbits) for himself in the grasslands. Before Artie ventures out, his father instructs him on what rabbits look like, how to move silently, and how to roar loudly. Living in the ground just below Artie’s family is Julie, a young rabbit, and her family. Julie’s father tells her that she will grow to be a clever rabbit who outsmarts lions. Before Julies goes out to find food for herself for the first time, her father teaches her what lions look like, how to jump high and run fast, and how to listen for tiny sounds. Simultaneously, Artie and Julie set off from home and end up in the jellyberry patch, unbeknown to each other. When it starts to rain, they both run into a cave where they meet and become fast friends. Julie learns that not all lions are ferocious and Artie learns that not all rabbits get scared. They spend the afternoon playing together, with Artie learning how to jump like a rabbit and Julie learning how to roar. When they say good-bye and head home, they each share about their new friend with their surprised parents.

Chen cleverly designed the book to highlight the parallel stories that come together and then separate again. When the book begins, the pages are split across the center, with Artie’s story being told on the upper pages and Julie’s on the lower. Readers can choose to read the two stories individually or concurrently. When Artie and Julie come together in the cave, their story is told on full pages that split again when they say good-bye and go to their separate homes. While the split pages make the book difficult to share with large groups of children, this story of unusual friendship is appealing to all. This book was originally published in Taiwan where two different Chinese versions are available. The stories begin in the same way but Artie and Julie’s adventures in the middle and the endings of the stories are different. The United States edition, reviewed here, draws on aspects of both of the Chinese stories.

Chen grew up in Taiwan and lives there today. The strong family support and security he felt growing up comes through in this book and in his other books. In Artie and Julie, Chen uses a variety of media, including watercolors, pastiche, and pencil, to create his playful characters and scenes. His use of rubbings, cut paper, and paint splattering add richness to his work. Many illustrations have animal families in smaller scenes, which add to the joy the book offers. The front and back endpapers show Artie and Julie in the grasslands, which they learn about but never reach in the book.

Artie and Julie invites discussions about making friends with others who are different. This book would work well in a text set that could include Yo! Yes? (Raschka, 1993), Owen & Mzee: The True Story of a Remarkable Friendship (Hatkiff, Hatkoff & Kahumbu, 2006), and Little Beauty (Browne, 2008). For students interested in moving to more complex discussions, books such as Crossing Bok Chitto: A Choctaw Tale of Friendship and Freedom (Tingle, 2008) and A Good Night for Freedom ( Morrow, 2003) would work well.