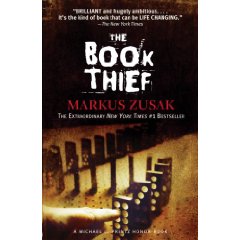 The Book Thief has a lot in common with The Diary of Anne Frank. In each, a young girl is forever changed by the events of World War II; both books illustrate the terror of living under Nazi rule; and both could be considered adult books due to their difficult subject matter. Anne Frank is a Dutch Jew who goes into hiding in Amsterdam, while the heroine of The Book Thief, Liesel Meminger, is a German citizen living in Molching, a small town outside of Munich. While Liesel doesn’t experience the dread of being discovered by Nazis or the hopelessness of the concentration camps, she does experience the constant fear of being discovered by German authorities for hiding a Jewish friend, and she empathizes with the Jews who are marched through Molching on the way to the camps. The Book Thief documents the gloom that many German citizens felt about what was happening in their neighborhoods, and the despair they felt while living under Nazi rule. Neither book is optimistic that the world will return to rightness, but The Book Thief, like The Diary of Anne Frank, leaves the reader with the knowledge that the human spirit can survive horrible times.

This touchingly funny and heartbreakingly sad novel contains many memorable characters: Hans, Liesel’s foster father; Rosa, her foster mother who curses to show her love; Rudy, Liesel’s best friend; and Max, the Jewish son of Hans’ friend from the first world war who Hans decides to hide in their basement. It also has an unlikely narrator: Death. This Death is not a triumphant presence eagerly awaiting the opportunity to snatch humans from this life; this Death is instead worn down from the work the war has created for him. He first meets Liesel when she is traveling with her mother and younger brother to Molching, where she and her brother will live with a foster family; her brother dies on the train before they arrive. Death witnesses Liesel stealing her first book – a book on grave digging techniques dropped by one of the men who bury her brother by the side of the tracks. This Death is not scary, offering tips on living, insights into the characters, foreshadowing of things to come, and even comes away changed from knowing Liesel.

Liesel acquires several more books during the course of the story; some are gifts and some are stolen. Books provide an anchor for Liesel; the act of reading becomes a liberating event, even if the book isn’t one she would choose for herself. Hans helps her overcome her loneliness by reading with her late into the night. When she and Rudy have the opportunity to steal from the rich mayor’s wife, she chooses to steal not food, not shoes, but a book. While living in their basement, Max spends his time painting over the pages of a copy of Mein Kampf and rewriting the book to give Liesel hope for a better future. During air raids, Liesel reads books to the frightened neighbors cowering in the bomb shelter to calm them. At the end of the story, Liesel is saved from the bombing that destroys her neighborhood by the book she has decided to write to document her experiences.

Markus Zusak was born in Australia to an Australian father and German mother. He grew up listening to his mother’s stories of her experiences as a child in a small German town, surviving the bombings and watching as Jews were marched to the concentration camps. He wrote The Book Thief to allow readers to witness another side of Germany during World War II, one where not all Germans belonged to the Nazi party and where some German citizens were willing to defy Hitler and risk their lives for their Jewish friends.

While The Book Thief could provide an interesting contrast with the experiences of Anne Frank and her family, it could also be read along with two books that document the experiences of German citizens during the war. Both are by Susan Bartoletti: Hitler Youth: Growing up in Hitler’s Shadow (2005) and The Boy Who Dared (2008). The first is a historical account that documents the German youth movement and follows several young people as they get caught up in it; the second is a fictional account of one of those boys, Helmuth Hübener, a young German who joined Hitler’s Youth only to become disillusioned with the Nazi party. He was eventually executed for his support of the German resistance. These books allow readers to learn about the experiences of German citizens, not all of whom were willing members of Hitler’s regime.