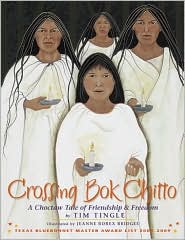 Bok Chitto is a river that runs through Mississippi. In the 1800s, Choctaw Indians lived on one side and on the other side were plantation owners and their slaves. If a slave escaped and crossed the Bok Chitto River, the slave was free. Although a young Choctaw girl named Martha Tom knows better than to cross the Bok Chitto River, one day she disobeys her mother and crosses while searching for blackberries. Now lost, Martha Tom stumbles upon a secret meeting of members of a black church in the Mississippi woods. An enslaved black father instructs his youngest son, Little Mo, to help Martha Tom find her way back to the river. So begins the friendship between Little Mo and Martha Tom, who continues to cross the river. Several years later, Little Mo’s mother discovers that she is scheduled to be sold and separated from her family. The situation seems hopeless, until Martha Tom and the Choctaw women help Little Mo’s family walk across the Bok Chitto River to their freedom.

Extensive endnotes provide information about Choctaw history, storytelling traditions and the background of author Tim Tingle. Tim Tingle is an enrolled member of the Choctaw Nation of Oklahoma. Tim’s great-great grandfather (John Carnes) walked the Trail of Tears in 1835. It was his telling of this event that spurred Tingle’s interest in storytelling and writing. Tim is now a sought-after storyteller and award-winning author. Crossing Bok Chitto was written as a tribute to the Choctaws, Cherokees, Creeks, Chickasaws, Seminoles and Indians of every nation who aided runaway people of bondage. As an insider, Tim Tingle provides literary excellence, cultural identity and authenticity. His writing flows with the rhythm and ease of oral tradition. The characters in Crossing Bok Chitto belong to the Choctaws and focus on the Mississippi Band. The customs and ceremonies described in the story have been passed down through the oral tradition of that tribe.

The illustrations by Jeanne Rorex Bridges appear realistic and authentic. Bridges is an award winning artist of Cherokee ancestry. She grew up in eastern Oklahoma on a farm. Attending Bacone College in Muskogee, Oklahoma, Bridges took classes in Indian art and learned the “flat style of painting” which originated by the Kiowa Five. Over the years, she has developed her own style which includes the basics of flat style painting while adding background work and shading, using many muted, softer colors. Flat style fits the historical and folkloric plot and setting of this story. Bridges uses acrylics on watercolor board paintings to create bold, mural-like illustrations that seem like portraits. Strong, emotion-filled, solid figures stare out at the reader. The scenes are large and clearly drawn so even students in the back of the classroom will be able to see as the story is being read aloud.

After evaluating Crossing Bok Chitto, it is clear to see why it was chosen as the 2008 American Indian Youth Services Literature Picture Book Award Winner. In both the writing and illustrations, this picture book authentically presents Native Americans, specifically the Mississippi Band of Choctaw Indians, in the fullness of their humanity in the past. Paired with books such as Almost to Freedom by Vaunda Micheaux Nelson (2003), Night Boat to Freedom by Margot Theis Raven (2006), and Freedom River by Doreen Rappaport (2000), young readers can further explore the issue of escaping slavery and friendship.