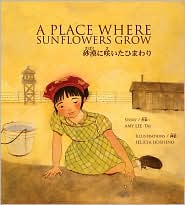 It is 1942 and the U.S. is at war with Japan. Approximately 120,000 innocent Japanese Americans are sent to live in internment camps. Mari, a young Japanese American girl, wonders why her family is forced to leave their happy flower-filled home and belongings in California to relocate to a tarpaper barrack in Topaz, Utah. Mari has many questions about why she must live in this windy, dusty place along with other Japanese Americans, but she is afraid to ask. Despite her unhappiness and her doubts about whether sunflowers can grow in the hot, dry desert, she plants a handful of seeds outside her new home. Upon the insistence of her parents, who are artists, Mari obediently attends art class at the Topaz Art School. Once there, she cannot find inspiration for her art. She struggles with life in the camp, from the noise in the mess halls to the lack of privacy in the bathrooms. With encouragement from her parents and art teacher, Mari perseveres and draws pictures of things that made her happy before coming to Topaz. Through her art Mari finds the courage to ask her father more questions about why they are forced to live in Topaz. She meets a friend named Aiko in art class. Together, they face their fears of living in a place plagued by dust storms, surrounded by barbed wire fences and watched by guardsmen with guns. In the end, Mari’s artwork suggests she learns to live within the barbed wire walls. She draws a picture of her family’s barrack in Topaz, herself with her friend Aiko, and most significantly, the sunflowers that finally begin to sprout.

Based on her mother’s personal experiences in an internment camp, Lee-Tai brilliantly weaves the thread of hope into a life full of hardship and injustice to show readers how the Japanese Americans persevered in the internment camps. Many Japanese American readers appreciate the presentation of Lee-Tai’s text, written in both the Japanese and English languages, however some Japanese American readers comment that the simplicity of the story almost minimizes the pain and hardship experienced by the internees. Others of Japanese ancestry feel that the author’s attempt to subtly raise difficult issues related to injustices from a child’s perspective is somewhat problematic without the depth of details to fully support the complexity of those issues. For example, Mari’s question to her father about why her family is detained in the internment camp when they have done nothing wrong is left unanswered in the story. The beauty and value of this powerful story is that young readers can understand that the sunflowers symbolize the hope that humans will persevere and survive despite dire circumstances. This story can be paired with the picture book Baseball Saved Us by Ken Mochizuki (1993), to explore how Japanese Americans found hope within conflicts caused by war.

Several Japanese Americans with family members who lived in the internment camps applaud the illustrator, Felicia Hoshino, for her realistic and insightful illustrations. The depictions of Japanese Americans are accurate and well-suited to the time and place. Hoshino cleverly uses color to create characterize Mari as a spirited young child full of hope by drawing a red bandanna on her head and dressing her in bright colors amidst the muted and dull colors of the background.

This story was awarded the Jane Addams Peace Association Book Award and is definitely a story to be shared with young readers.