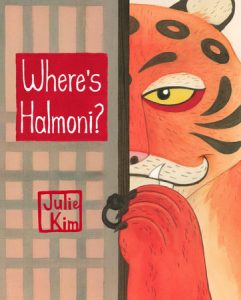 Where’s Halmoni? is a realistic fiction graphic novel in which fantasy dominates the story plot to make two main characters’ journeys possible in the book. A big sister (Nuna) and her little brother (Joon) visit their Halmoni’s house, but there is no answer from their grandmother. The children start looking for her without knowing their “search” will take them on a long adventure beyond her house. After they search every corner of every room, they still cannot find their grandmother. Then Joon sees a new built-in closet he has never seen before; he enters the closet, which takes Joon and Nuna to a new exterior. This visual narrative has semi-chapters in which each section starts with either a rabbit, tiger, fox or goblins joining the children on the journey looking for Halmoni. Each special character appears and give clues to solve the problem of finding the children’s grandmother.

The hidden clues in beautiful illustrations styled like Korean folk art make this story fun and adventurous. Where’s Halmoni? is such an important picturebook for several reasons. First, the Korean written language (Hanguel) is integrated with the illustrations as part of the characters’ narration of the story. For example, the first mysterious character, the rabbit, speaks Korean and his words are integral parts of the illustrations. Second, each chapter starts with a Hanguel title followed by an English title. Also, each title includes a pronunciation guide so that a non-Korean audience can try reading the Korean titles. The story panels are not typical bilingual texts that English speakers skip over, but rather words in Hanguel appear fun and occupy significant segments of the illustrations. Joon is helping the intended English-speaking audience by asking “What did it say?” and Nuna’s responses to Joon, “I think it said it was tasty…” helps readers make meaning of the text. Nuna’s stronger Korean skills help Joon and audiences understand what the rabbit says in Korean. It is a charming way to orchestrate two languages in a book. The book would be extra exciting if the readers are familiar with Hanguel or Korean as their heritage language.

Even if readers don’t understand the written Korean language, characters’ dramatic facial expressions and body language in the illustrations give sufficient clues to the story flow. The power of the visual texts makes up for areas where the text is difficult, allowing readers to comprehend the stories through unspoken clues. Hanguel in calligraphy styles and mixed with English appears to be fun and accessible. For example, a laughing sound in English, “he he he” is mixed with Korean laughing sign “ㅎ ㅎ ㅎ”. Hanguel is illustrated and placed cleverly so the characters provoke readers’ curiosity and they want to understand instead of skipping it. The book invites the intended audience to look closely at visual texts in the illustrations.

Where’s Halmoni is a clever book that recognizes children’s previous literary experiences so that they can make intertextual connections with other books they know. Some of the story plots in this book remind young audiences of two famous classic children’s books, The Lion, the Witch, and the Wardrobe by C.S. Lewis (1950) and Alice in Wonderland by Lewis Carroll (1865). Nuna’s and Joon’s fantastic journey through a built-in closet and encounters with characters reminds readers of these classics, especially Alice in Wonderland when they meet the first character, a rabbit (Sung, 2019).

Korean-immigrant author Julie Kim’s thoughtful and authentic Korean folk art illustrations have been selectively available in the United States. In her author’s note, Kim writes, “Long ago my family moved from Korea to an unfamiliar land called America. The folktales followed us to our new home, just like the goblin door handle… Whenever something disappeared, my parents would still say, ‘this must be dokkaebi (Gobline) playing tricks!’ At night, stories of the tiger and the wily fox still gave us shivers”. American readers may think dragons are Asian folktale creatures, not these seemingly common animals. Dragons in other Asian cultures like Chinese cultures are not the same as Korean folk cultures. Instead, Moon rabbit, the tiger, Korean Dokkaebi (Gobline), and Nine-tailed Gumiho (fox) are all common characters in popular Korean folklore and folk arts. Where’s Halmoni rejuvenates the power of Korean folklore by in a modern fantasy framed by contemporary settings at the beginning and the end of the book. Korean folklore and folk arts are reborn with opportunities that allow young readers to make a wide range of connections to their literary knowledge and to create new interest in Korean culture, including language, folk arts, and literature.

Where’s Halmoni? can be explored through a variety of sub-themes including sibling relationships, companionship on journeys, and Korean folklore. It can be paired with other books about sibling relationships such as Tale of Dark Grimm (Adam Gidwitz, 2010), Sisters (Raina Telgemeier, 2014), Under the Broken Sky (Mariko Nagai, 2019), and A Place to Belong (Cynthia Kadohata, 2019). The Korean Red Riding Hood, The Sun Girl and the Moon (Yangsook Choi, 1997), is great for talking about gender stereotypes and twists in Korean cultures.

Julie Kim lives in the Pacific Northwest where she loves to make small stories with big pictures. A graduate of Rhode Island School of Design, she has illustrated picture books, children’s magazines, and book jackets. More information about Julie can be found on her website and in her blog.

WOW Review, Volume XIII, Issue 2 by World of Words is licensed under a Creative Commons Attribution-NonCommercial-ShareAlike 4.0 International License. Based on work by Yoo Kyung Sung at https://wowlit.org/on-line-publications/review/volume-xiii-issue-2/11/.