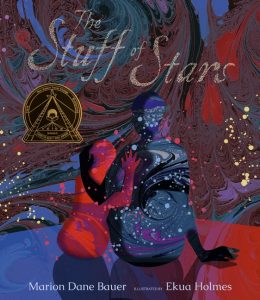 The illustrations in this book are exceptional as they flow from double-page spread to double-page spread throughout the entire book with each page more spectacular than the previous one. Ekua’s illustrations consist of hand-marbleized paper and collage with dark color hues and soft moving abstract shapes before the Big Bang. Then, using vibrant colors and more precise shapes, Ekua illustrates the explosion of the BANG with fireworks from the exploding stars. Images of “Jellyfish, spiders, into ferns and sharks, into daisies and galloping horses” are visible. On one page toward the end of the book there is a feeling of a timeline with dinosaur skeletons below the earth and human shapes above, depicting a change over time. The illustrations are truly a unique experience. This book is a well-deserved recipient of the 2019 Coretta Scott King Award for illustrations.

The Stuff of Stars is a perfect book for topics such as the cosmos for older readers or space and time for younger readers. Because it looks at creation through two different lenses, texts with themes of creation stories from multiple perspectives and change over time would pair well. One example is In the Beginning: Creation Stories from Around the World by Virginia Hamilton and Barry Moser (1991). This book has multiple stories within the anthology that tie well with both creation and evolution. Another story, Who Came Down that Road by George Ella Lyon and Peter Catalanotto (1992), helps young readers visualize earth from the beginning of time to the present, examining the evolution through change over time. Eric Rohmann’s (1994) Caldecott Honor book, Time Flies, is a wordless picture book that examines the theory that birds come from dinosaurs and provides readers with a way to examine evolutionary theory. George Ella Lyan and Peter Catalanotto (1998) pair up again in Dreamplace to take us back in time to look at a vanished culture.

Marion Dane Bauer has won multiple awards and has written more than one hundred books. Her awards include the Newbery Honor Book for On My Honor (2012) and the Kerlan Award for her body of work. She taught at Vermont College, but has moved to Minnesota where she now devotes her life full time to her writing.

Ekua Homes has also won several book awards for her illustrations including the John Steptoe New Talent Illustrator Award, a Caldecott Honor, and for two consecutive years, the Coretta Scott King Illustrator Award. Ekua grew up in Boston and takes her inspiration for her collages from her life collection of moments shared with family and friends. She is currently the Assistant Director of MassArt’s Center for Art and Community Partnerships in Boston.

These two award winning women have taken this book to new levels of “best.” Author and illustrator work together to create an exemplary picturebook in which the message of the book is displayed equally between text and illustrations. They both tell the story of the Big Bang Theory exceptionally well.