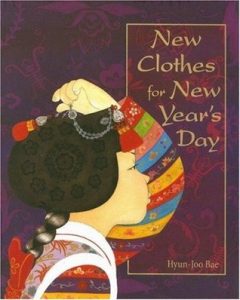 A New Year, a new day, a new morning. New clothes.
We start the year with new things. New things, for the year-older me. (n.p).

One of the holidays celebrated universally is New Year’s Day. Every country around the world welcomes the beginning of a new year in its own special way with cultural traditions, anticipating what the future may hold with excitement. It is usually the time to make resolutions and plans for better lives as we grow a year older. Such a celebration also brings family members together, but the time when the New Year is celebrated is not necessarily the same in every culture. Some countries celebrate according to the lunar calendar, which is different from the solar calendar. Korea celebrates according to both calendars, though most people observe the Lunar New Year’s Day.

Originally published in Korea in 2006, New Clothes for New Year’s Day is a story told in a first-person narrative by the young girl protagonist. Although her name is unknown, she takes readers to Korea on a Lunar New Year’s Day during what appears to be the Joseon Dynasty. The story begins as the young girl arises and waits for the sun to appear in the sky on the very first day of the New Year. Her clothes are white, but as she gets ready, she puts special garments on top of what she is already wearing. Her outfit becomes rich and colorful as the story progresses. The book ends with the girl dressed in her beautiful warm Korean traditional clothing, ready to wish everyone good luck as she steps outside where new snow is falling for New Year’s Day.

The book is written with the young girl explaining to readers how to dress in a traditional Korean New Year’s outfit, describing each part of the challenging process in a humorous way. The book also emphasizes the word ‘new’ repeatedly, which expresses the young girl’s excitement. Her mother made the new clothes she wears, and the shoes are a gift from her father, so her overall outfit shows her parents’ love for their daughter. Although there is no illustration of the parents, the picture shows the girl’s feelings of pride and joy as she puts on her special outfit, which manifests her family’s devotion for her. Some of the pages show pieces of traditional Korean clothes and accessories, which provide the reader with hints and clues for what the girl will wear next as she dresses herself for the New Year. The detailed background also represents the interior design of a traditional Korean house in the Joseon Dynasty.

This book is a great way to share how young Korean girls dress in their traditional Korean clothes, especially because this very outfit is still worn during the New Year holidays in modern day Korea. Korean culture is authentically represented in both the texts and illustrations. Additionally, the pictures that show the protagonist’s new skirt and jacket hung on a traditional hanger are historically accurate. The last two pages at the end of the book provide readers with an in-depth detail of the entire outfit the main character is wearing.

New Clothes for New Year’s Day would pair well with This Next New Year (Korean-English Bilingual Edition) by Janet S. Wong (2014), Dumpling Soup by Jama Kim Rattigan (1998), and Happy New Year! by Emery Bernhard (1996). These books can be used together to explore how children with diverse racial backgrounds celebrate the New Year with their family and friends. These books also introduce how the New Year celebration takes place at various times and how people engage in celebrations with their traditional cultures. Although the New Year is celebrated in so many different ways, these books remind us that the beginning of a new year is a holiday when we gather together to let go of the negative past and to endeavor to make improvements with a joyful spirit for the future in starting anew. Moreover, these books may provide an opportunity for educators to have their students share their unique cultures of celebrating the New Year and engage in a class discussion about their special family traditions.

The author and illustrator, Hyun-Joo Bae, was born in South Korea and graduated from Ehwa Women’s University. She studied at the Hankook Illustration School and is very fond of traditional Korean culture and folktales, which are also her hobbies and interests. She enjoys working on picturebooks about traditional Korean culture and folktales. More information about Hyun-Joo Bae can be found online at: https://www.encyclopedia.com/children/scholarly-magazines/bae-hyun-joo