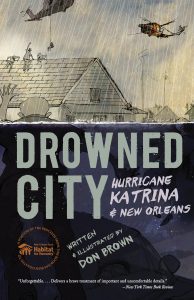 In this graphic novel, author/illustrator Don Brown relates the story of Hurricane Katrina and its impact on New Orleans. The narrative begins in Africa with a breeze escaping the continent. As it travels across the Atlantic, the wisp of a storm develops into a category 5 hurricane that kills six people in traveling across Florida. As it moves across the Gulf of Mexico, it decreases to a force 3, but is 400 miles wide and heading for a vulnerable New Orleans. Eighty percent of the residents evacuate but left behind are the people who have no money or transportation and no way out, or who refuse to leave. Brown introduces one of the many communication mishaps, as empty buses and trains departed from the city with no passengers, leaving behind people who did what they could to prepare for the hurricane and survive. No one foresaw the devastation that occurred as the winds and water pounded the city, eventually breaking the levees and flooding most of the city, some parts in water 20 feet deep.

What could be a grisly book describing over 1800 deaths and the massive destruction of property, instead has a journalistic and factual style describing the dangers and the failures. Don Brown relates how city and federal government officials failed to coordinate rescue efforts and help the thousands stranded in houses and the Superdome. Help was agonizingly slow in coming as officials ignored news footage, argued over control of the Louisiana National Guard, and made promises that took days to materialize. The graphic novel also relates the way people tried to help each other, and the early rescue efforts of employees of the Louisiana Department of Wildlife & Fisheries who took it upon themselves to use their flat-bottom boats in the choppy waters and flooded streets to rescue thousands of people. Rescuers were on their own, with no leadership or communication. The focused look at humans helping, rescuing, and caring or not caring makes this book the winner that it is. In a Booklist interview Brown describes the way he kept the narrative centered on people, and the reader gains a sense of the heroic deeds, strengths, weaknesses, and failures of people as they cope with the magnitude of the disaster.

The illustrations are rendered in pen and ink with digital paint in an earth-toned palette. The drawings are done in a minimalist style so that Brown can accurately describe and draw the destructive wind and flooding of the city while, at the same time, distancing readers from the raw fear and anger of stranded people, the danger of contaminated water full of dead bodies and debris, and the lack of help for days. The result is a journalistic style that tells the story in a matter of fact way, but with an undercurrent of frustration at the politicians and service providers who failed to help fast enough. Brown states that “In a graphic novel, art contained in panels can examine details only hinted at in a larger scene or follow the components of an action. In so doing, elements of the story can be emphasized or enlarged, heightening drama and sharpening the narrative tension” (Jesse Karp 2016 Booklist interview). The graphic novel concludes with the statement of a young builder who is sinking piles deep into the ground to prevent houses from floating away in a similar storm. The young man grew up in New Orleans and declares “We’re coming back. This is home. This is life” (p. 90-91). The book has extensive source notes and a rich and diverse bibliography from government reports to interviews and newscasts.

Award-winning authors and illustrators have published books about Hurricane Katrina that pair well with the non-fiction Drowned City. National Book Award winner Jesmyn Ward (2011) describes a poverty-stricken family’s preparations for the approaching hurricane in Salvage the Bones. In Ninth Ward, Jewel Parker Rhodes (2012) writes about a 12-year-old girl surviving the hurricane with her caretaker. In both A Storm Called Katrina (Myron Uhlberg and Colin Bootman, 2011) and Hurricane Song: A Novel of New Orleans (Paul Volponi, 2009) the authors describe a family’s sojourn in the overcrowded Superdome. Finally, in Zane and the Hurricane: A Story of Katrina, Rodman Philbrick (2014) narrates how a boy and his dog survive the storm.

Don Brown has published over 20 picture book biographies ranging from well-known scientists (Odd Boy Out: Young Albert Einstein, 2004) to lesser known adventurers (Far Beyond the Garden Gate: Alexandra David-Neel’s Journey to Lhasa, 2002). His non-fiction illustrated books for older readers range from graphic novels of natural disasters (The Great American Dust Bowl, 2013) to his award-winning description of the Syrian refugee crisis (Unwanted, 2018). He won the 2016 Orbis Pictus award for this book. Besides his works of nonfiction, he has published several historical fiction novels. He lives in New York with his family. More information can be found at https://www.booksbybrown.com/.