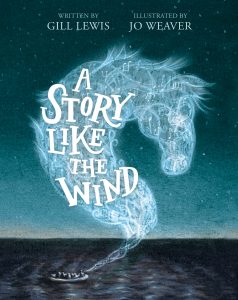 A Story Like the Wind is the account of a small group of seemingly unconnected people trapped together on a small boat in the wide expanse of an unknown sea, following them through one night of their journey together. Rami, a proud boy with a silk scarf around his neck, seems to have nothing to share with the rest of the passengers but ends up bringing the cluster of people huddled in the boat closer together through his music and the story of a wild and free horse.

At the beginning of the book, the other members of this small group introduce themselves emphasizing their Muslim names as if wanting to be remembered in case something were to happen to them, which seems inevitable under the circumstances. The group has fled in desperation. Some bringing food and clothes on the journey. Others bring just one thing: Muhammad a dog and Rami beloved fiddle. Each member tries to share with the others, but Rami refuses each item as he thinks he has nothing to give back. As the dark night wears on, Nor, a young mother with two children, asks Rami to play his fiddle to take their minds off the choppy sea, and, as he plays, the music tells stories. Each segment of that story prompts members of the group to recall and tell parts of their own stories.

Rami’s fiddle tells the story of a young Mongolian shepherd, Suke, who nurses back to health an abandoned foal in the frigid mountains filled with snow. The white foal grows up to be a proud, headstrong and exceptional stallion in all its magnificence, strength, and uninhibited soul. Later in the story he is pitted against the ‘dark’ lord and a ‘black’ horse. Suke and the ‘white’ horse win the race that ends up killing the ‘black’ stallion when his heart gives out. In revenge, the dark lord takes the white horse, raises the taxes of the people, and banishes Suke’s family to the mountains. His intent is to break the spirit of the white horse, but to no avail. The white stallion follows his instinct and escapes when the dark lord thinks he has subjugated the horse just as he has subjugated the people. As the stallion runs, he is showered with arrows, many of which pierce his skin. The stallion finds Suke, dying in his arms. Suke later dreams of the stallion asking him to create musical instruments from his bones. The music from these instruments rides on the wind and tortures the dark lord who digs a hole and buries himself to get away from the sound of the lyrics proclaiming freedom. Rami’s melodic story is a tale of oppression, flight and freedom, and reminds the travelers that liberty cannot be taken from them because it exists all around them.

This remarkable book invites readers into this story of freedom starting with the cover. Dark and ominous seas surround a small boat in the bottom third of the illustration. An image of a horse’s vapor-like body is rising as if freed from the bounds of the vessel. The title of the book is bound within the horse’s neck, along with myriad notes of music. The cover sets the stage for the story as all the necessary components are visually accessible and help the reader know what to expect.

This story is another tale of refugees and their personal and general struggles as they take on harrowing journeys to reach a safe shore where they can begin a new and more secure existence. They want to end up where they do other things besides fight for their lives. What sets this story apart is the distinctive hauntingly monochromatic illustrations set in shades of blue and black to white that add to the overall ambience and mood of the narrative, accompanied by the lyrical text in varied fonts. The author cleverly weaves stories within stories to become an endless tale. The basic message of freedom of the soul is very well articulated.

This story is one of the deluge of refugee tales pouring into the U.S. market. There are multiple issues with this text as the reader is left hanging with unanswered questions. For example, the ticket for an inflatable boat costs $1000. There is no mention of how they get the foreign currency cash to take this harrowing journey. This group of humans is cast adrift without a guide or even an oar to maneuver their way. The book ends with no definite resolution of their conflict and culminates with a double-page spread with stormy, choppy, seas, with dawn breaking and the boat floating on the lower right-hand side corner of the page. Each of the names of the passengers is definitely Muslim, so the perception of only Muslims as displaced individuals is reinforced. No one in the entire group mentions God’s name nor does anyone carry any sacred scripture like the Quran. While necessary, these refugee tales lend themselves to making readers more susceptible to becoming immune to the very real plights of the suffering refugee children. But this is a good book to begin conversations about issues dealing with refugees and displaced individuals, be they from Muslim countries or other regions and religions.

The book has received starred reviews from Kirkus and School Library Journal and is on the 2018 OIB list (Outstanding International Books). A Story Like the Wind can be paired with other books with the same thematic focus, such as The Day You Begin (Jacqueline Woodson and Rafael Lopez, 2018), The Journey (Francesca Sanna, 2016), The Bone Sparrow (Zana Fraillon, 2017), and Refugee (Alan Gratz, 2017).

Gill Lewis is a veterinarian turned writer. She lives in England and writes her stories in a tree house. Other books by Gill Lewis include One White Dolphin (2013), Murphy and the Great Surf Rescue (2017), and Gorilla Dawn (2017), some of which have received prestigious awards. Two of her titles have been on the OIB list: Moon Bear (2017) and A Story Like the Wind (2018).

Jo Weaver is an illustrator who previously worked in international development and with the homeless. She lives in London with her family and treasures the chance to get outside and appreciate the creativity of the natural world. Her books have been nominated for the Carnegie and Greenaway Medals.