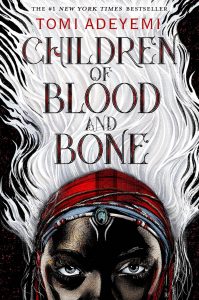 This fantasy novel is set in the fictional land of Orïsha and is told from the perspectives of three teenagers who are pulled together on a quest to change the fate of their world. Zélie Adebola is the main protagonist, telling her story from the perspective of the oppressed cultural group of the maji, adult members of her culture. Zélie is a divîner, a child chosen by the gods to wield magic after the age of 13. She has silver eyes and white hair that are striking against her dark skin and are signs of her heritage. Zélie is hot tempered and suffers greatly from the trauma of watching her mother’s murder. She longs for the freedom to celebrate her family’s cultural practices, which have been made illegal. Amari is the daughter of the brutal tyrant King Saran who executed thousands of maji when their magic mysteriously vanished. Amari lives a stifled life, rigid with restrictions and obligations, including chemically lightening her skin so that she better represents the color of the royals. Amari passively accepts her existence, until her father goes too far and executes someone dear to her. The last perspective is Inan, prince of Orïsha. Inan has the most inner turmoil to wade through, truly believing in the work of his father, seeing the mass killings of maji and divîners as retribution for crimes caused by an overreach of power. Inan struggles to see why his father’s actions are more than just claiming justice, and how his father’s choices have created a generation of people like Zélie and her brother Tzain, who mourn family members tragically lost because of the king.

Adeyemi’s ability to build multifaceted characters with flaws and faults makes this book a valuable addition for young people of color looking for literature where they can see themselves in fantastical settings, doing incredible things like Zélie and Amari. Adeyemi paints a brilliant masterpiece of a believable, yet wildly imaginative, world filled with beauty and darkness. From amazing creatures to detestable slurs, Adeyemi leaves no stone unturned when it comes to detail. In the Author’s Note, she makes it clear that she intended to tell a fantasy story with allegorical aspects that reflect the trauma inflicted on the Black community in the United States due to unchecked police brutality. Adeyemi unflinchingly describes the terror and heartache felt by survivors of systemic violence through the agony that Zélie endures, as a parallel to the agony of real survivors in our world. The themes of oppression and violence are hot topics that need to be discussed with students. The tones in this novel can be very dark at times, which gears the text toward students aged 14 and up. Adeyemi provides a novel study-guide on her website; teachers of many academic areas can easily utilize this tool.

Children of Blood and Bone is a great example of fantasy that centers on African-based culture and characters. There has been a growing urge among writers and readers for more books like this to shed light on the fact that the fantasy/science-fiction genre is for everyone and can be about anyone. This book can be paired with those by other authors who have created fantasy with similar themes and settings. Beasts of the Night by Tochi Onyebuchi (2017) is another example of fantasy with West-African roots. Onyebuchi’s mother is Nigerian, and her experiences inspired many aspects of his work. Who Fears Death by Nnedi Okorafor (2010) is another example of West-African inspired fantasy, with a focus on science-fiction dystopia. This novel is very intense and is definitely for older readers, as is Children of Blood and Bone, due to violence and traumatic elements.

Tomi Adeyemi draws on the knowledge of her heritage as a Nigerian-American and her education. Adeyemi studied English Literature at Harvard University and then West African Culture and Mythology as a graduate fellow in Salvador, Brazil. Dr. Jaye Winmilawe (2018), author, professor, and priest of Yoruba, praised Adeyemi for her use of Yoruba references throughout her novel. The author masterfully blends real aspects of the religion with the repurposing of words from Yoruba to mean different things, or as names of cities and landmarks. This powerful use of fact adds more layers of meaning, that can be used in teaching students about West African culture and world religion.