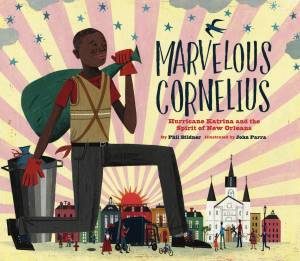 This book tells the tale of a real-life garbage man of humble origins who made a difference to the city of New Orleans in the aftermath of Hurricane Katrina. Phil Bildner tells the tale of Cornelius Washington, a street cleaner who lives in the French Quarter section of New Orleans and sees the street cleaning of his local area as his calling. Cornelius takes to heart Dr. Martin Luther King, Jr.’s proposition that whatever job we do, we should do it well. Cornelius makes his town sparkle and takes great pride in his job. He dances up one avenue and down another. Then hurricane Katrina hits, and the Mississippi River rises and floods New Orleans, leaving trash, death, and decay in its wake, “a gumbo of mush and mud.” After a period of mourning, Cornelius and others from New Orleans and around the country worked to make New Orleans sparkle again.

Marvelous Cornelius is a story of an everyday hero, demonstrating how an ordinary man can better all of us through example. Cornelius is a regular guy who is committed to his community. He does not have any extraordinary talent or power but takes pride in his home town of New Orleans and works diligently in his job as a garbage collector to make sure the streets ‘sparkle.’ He does his job with finesse and entertains while he cleans, shouting to locals and marching up and down the streets. Cornelius betters his community not only by doing an exemplar job cleaning the streets, but also by bringing the community together. This story is also a wonderful exemplar of figurative language such as alliteration and repetition.

Illustrator John Parra uses primary and pastel colors in a folk style approach that fills the entire page with outdoor illustrations. In an interview with Lee Wind from the Society of Children’s Book Writers and Illustrators (SCBWI) Blog he stated that he was influenced by many of the regional folk artists around New Orleans. He was especially influenced by Clementine Hunter’s use of color and tone to make feeling exude from her paintings. Hunter has become one of the most well-known self-taught artists, often referred to as the Black Grandma Moses, depicting life on a southern plantation in the early 20th century.

Two books that could be paired with Marvelous Cornelius and also have an African-American hero or folk hero are Wind Flyers by Angela Johnson and Loren Long (2007) and John Henry by Julius Lester and Jerry Pinkney (1994). Wind Flyers tells the tale of a band of undercelebrated World War II heroes, the Tuskegee Airmen. The book tells one boy’s story of his love of flight that takes him on a journey from the back roads of Alabama to the war-torn skies of Europe. The Tuskegee Airmen are an underappreciated group of brave young men and their contribution to American history should be shared. John Henry is based on the famous African-American folk ballad. The story tells of the legendary contest between a spirited young man with a hammer and a steam drill to build a tunnel through the Allegheny Mountains of West Virginia. The story shows what one individual can do when he is determined.

Phil Bildner was born and raised in New York in the town of Jericho on Long Island. Though he holds an undergraduate degree in Political Science from John Hopkins University and a Law Degree from New York University he quickly knew that law was not his calling. He returned to school after practicing law for a short time and got a degree in education and became a teacher. Phil taught for over ten years in New York City public schools but left the classroom in 2006 to write full time. He currently lives in Newburgh, New York, and visits many schools each year to promote writing and reading.

John Parra was born and raised in California though he currently lives with his wife, Maria, in Queens, New York. He is an award-winning illustrator, designer, and painter whose children’s books have earned numerous awards. His original artwork has been displayed in numerous galleries and museums. In 2015, John had a special event at the Metropolitan Museum of Art in New York showcasing his art and illustrations. In 2017, John’s art was used to create six Forever postal stamps for the United States Postal Service titled “Delicioso.” John also creates and sells his art to private collectors.