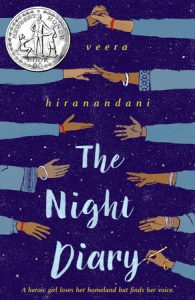 This epistolary novel is set in India in 1947, at a time when the country is on the brink of independence from British rule. The protagonist, 12-year old Nisha, receives a diary from Kazi, her family’s house help, on her birthday in July 1947. She decides to start writing letters to her deceased mother because she wants to explain things to her mother as if she’s “writing a storybook.” She wants to make it real so she can imagine it and “remember what everyone says and does” (p.3). Nisha writes in the diary every night, gradually revealing to the reader the events that unfurl not only in her own home, but also in her country that is becoming independent and partitioned into two nation states.

Nisha tells her Mama about her twin, Amil, who is dyslexic; her father, who is still bemoaning the death of his wife and is distant; her grandmother (Dadi) and about Kazi. Four days after having received the diary, when Nisha’s family has three unfamiliar visitors, the protagonist discloses to her mother how she eavesdropped on Dadi’s conversation with the strangers and uses the diary to process her thoughts. She “heard bits and pieces of sentences, words and names” she has heard her father talk about to Dadi and seen in the headlines of newspapers — “Pakistan, Jinnah, independence, Nehru, India, British, Lord Mountbatten, Gandhi, partition” (p.15). As the story moves along, readers learn how and why these words and names fit together and what implications they have on independent India as well as on Nisha’s family.

Religion plays an important role in Hiranandani’s narrative as the protagonist and her family navigate the secular tensions that underlie the riots that occurred during the partition of the subcontinent. India was freed from British rule in August 1947 and new boundaries drawn to create a Hindu-majority nation (India) and a Muslim-majority one (Pakistan). As a result of this sudden splitting of the subcontinent, millions of Hindus, Muslims and Sikhs, including Nisha’s family, are suddenly displaced. They are forced to cross the newly-established borders and embrace citizenship in one of the two nations based on their religion. With a Hindu father and a late Muslim mother, Nisha does not understand which side of the border her family should be on. She battles her doubts and fears as her family is suddenly torn away from their home on the Pakistan side of the border and forced to migrate to the Indian side. As a refugee, Nisha not only struggles with the loss of her homeland but also wrestles with her own identity. Although a large portion of The Night Diary deals with the trauma of refugees making a long and arduous journey across the borders of India and Pakistan, the novel concludes on a hopeful note.

As noted in a recently published study, there are few English-language books that address the topic of the Partition of 1947 (Sivashankar, 2019). The Night Diary is an essential read for those who are interested in learning about this significant historical event that not only impacted the South Asian landscape but also the global one. This novel provides a window into what Hiranandani (2018) refers to as “the largest mass migration in history” (p.256). Considering how vital the discussion surrounding immigration, refugees, and forced displacement is in today’s world, this historical novel will be a valuable addition to the existing conversation about borders and boundaries. It will provide readers with insights into what forced migration looked like in the past and how it was experienced by people in the countries of India and Pakistan.

The Night Diary can be paired with the middle-grade series, The Surya Trilogy by Jamila Gavin (1992, 1997, 2001), as well as the young adult novel, A Beautiful Lie by Irfan Master (2011). Picturebooks such as Nina Sabani’s Mukand and Riaz (2007) and Stitching Stories (2011) can also be used to explore the topic of the Partition in a classroom. Parents and teachers can use resources such as the 1947 Partition Archive (https://www.1947partitionarchive.org/) and the journal article included in the references to provide information on this issue for children.

Veera Hiranandani received the Newbery Honor Award (2019), the Walter Dean Myers Honor Award (2019), and the Malka Penn Award for Human Rights in Children’s Literature (2018) for The Night Diary. The novel was inspired by her Indian father’s personal experiences during the Partition of India and Pakistan. After a short stint in marketing at a corporate law firm, Hiranandani went on to study fiction writing and eventually become an editor at Simon and Schuster. Subsequently, she worked as a Montessori teacher and a college admissions counselor and is currently a teacher of creative writing at Sarah Lawrence College’s Writing Institute. She is also the author of The Whole Story of Half a Girl (2013), a Sydney Taylor Notable Book and a South Asian Book Award Finalist.