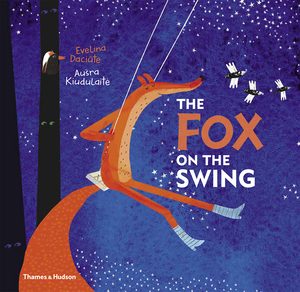 Winner of the 2019 Batchelder Award for translation, this unusual picturebook was originally published in Lithuania. The award recognizes an American publisher for the most outstanding translated book originating in a country outside of the U.S. and in a language other than English. The award was originally established in 1966 to encourage American publishers to bring more translated books into the U.S. Given that only 3-4% of the children’s books published each year in the U.S. are translated books, the award serves as an important resource for high quality translations.

On the surface, the book depicts the relationship between a lonely boy looking for adventure and a fox that he encounters on his way home from school. On the first page, readers are told that Paul and his parents are a fairly normal family–apart from the fact that they live in a tree–an immediate signal that this book has unexpected twists. The story explores the frustrations, loneliness, and fears a child experiences as a result of adult decisions. Paul’s conversations with the moody fox, whom he encounters regularly, are deep and philosophical. The book is illustrated with mixed media and digital collages with fonts that change in size and color to reflect the changing moods of the boy and fox. The unexpected ending of this fresh, original story brings satisfaction for the reader, even after the boy’s family moves away and the boy wonders if he will ever be happy again.

This picturebook has many layers of meaning that support connections ranging from a child’s need for friendship to much deeper life issues, inviting readers to linger in the book over multiple readings. The many layers to the story support a wide audience; children will enjoy the surface story about the need for a friend and a child’s frustration at parental decisions, and older readers will connect to the philosophical discussions. One important life lesson for the boy is how to be a friend in ways that are appropriate to the widely changing daily moods of the fox. Their philosophical discussions focus on the nature and complexity of happiness. In fact, the original title of the book in Lithuanian is translated as “Happiness is a Fox.”

The multiple themes of this book provide for a range of possible connections. The philosophical dialogue between the fox and the boy can be connected to the classic The Little Prince by Antoine de Saint-Exupéry (1943), as well as to picturebooks with many layers, such as Cicada by Shaun Tan (2019). The Forest by Riccardo Bozzi (2018) and Up the Mountain Path by Marianne Dubuc (2018) are other philosophical pairings. Another interesting pairing is books which challenge adults who make decisions for their children, instead of respecting a child’s ability to think, such as The Composition by Antonio Skarmeta and Alfonso Ruano (2000). Jerome by Heart by Thomas Scotto and Olivier Tallec (2018) is a book for younger audiences about a boy’s love for his friend and the happiness his friend brings to his life, despite his parent’s disapproval. All of these paired books are translated, except for Cicada, which comes from Australia.

One of the criteria for the Batchelder is that readers should be able to sense that the book comes from another country. The Fox on a Swing is a good example of a fantasy picturebook where a specific cultural context or community is not immediately evident in the text or illustrations. Instead, the sense that this book is from another country grows out of the unusual nature of the story and the philosophical dialogues not typically found within books written and published in the U.S.

The author is a writer and poet from Vilnius, Lithuania, who has spent time in Southeast Asia where her husband has been involved in diplomatic service. The mother of four children, Daciūte studied journalism and worked in the field of show business, telecommunications, child protection, and public relations. She has published short stories, poetry and novels for both adults and children, but is drawn to the ways in which stories encourage children to explore deeper understandings about life. She has tremendous respect for children as thinkers, arguing that they should be communicated with in the same way as adults. The Fox on a Swing is her most successful book in Lithuania.

Aušra Kiudulaite is an illustrator and artist who lives and works in Lithuania, with some of her work created under the name of Menulis Ranulis. She says that her inspiration to become an illustrator was her own children because she wanted to teach them how images can transmit and communicate the strange and funny stories that compose the universe. Her artistic influences include children’s vintage books, old movie posters and graphics, and Japanese printmaking. She has illustrated several picturebooks in Lithuania and worked in many different aspects of the field of illustration.