A tourist spots a fisherman napping in his boat and tells him what he could achieve if he spent more time fishing, but it’s the tourist who ultimately learns something.

In 1977, when Zhongmei Lei was eleven years old, she learned that the prestigious Beijing Dance Academy was having open auditions. She’d already taken dance lessons, but everyone said a poor country girl would never get into the academy, especially without any connections in the Communist Party of the 1970s. But Zhongmei, whose name means Faithful Plum, persisted, even going on a hunger strike, until her parents agreed to allow her to go. She traveled for three days and two nights to get to Beijing and eventually beat out 60,000 other girls for one of 12 coveted spots. But getting in was easy compared to staying in, as Zhongmei soon learned. Without those all-important connections she was just a little girl on her own, far away from family. But her determination, talent, and sheer force of will were not something the teachers or other students expected, and soon it was apparent that Zhongmei was not to be underestimated. Zhongmei became a famous dancer, and founded her own dance company, which made its New York debut when she was in just her late 20s.  In A Girl Named Faithful Plum, her husband and renowned journalist, Richard Bernstein, has written a fascinating account of one girl’s struggle to go from the remote farmlands of China to the world’s stages, and the lengths she went to in order to follow her dream.

As one of many Pudgies awaiting their trip to the meat factory from the Pudge Processing Farm, little Hubert escapes to the jungle where the animals show him all the good foods he can eat and, as a result, he becomes the first Pudge to achieve full size since ancient times. 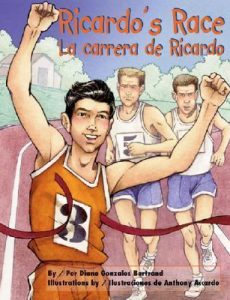 Ricardo Romo never dreamed that running to catch the school bus would lead to a college education, and ultimately, to a long and respected career as a teacher, administrator, and university president. He grew up in San Antonio, Texas, the son of Mexican immigrants, and worked in his family’s small grocery store, where he learned to work hard and respect his family and neighbors. In school he learned that, as a Latino, he was expected to go to the technical high school rather than the one that prepared students for college, yet his teachers and coaches encouraged him to pursue his studies. They also fostered his natural athletic abilities as a runner. In high school, Ricardo set numerous records in track and cross country, including the country’s second fastest recorded mile at that time. While still a sophomore, he began to receive invitations from colleges and universities urging him to consider running for their schools. Ultimately, he went on to run for the University of Texas at Austin, where he graduated with an undergraduate degree in history. While injuries ended Ricardo’s hopes of competing in the 1968 Olympics, his educational dreams were achieved when he obtained a master’s degree from California State University, Northridge and a Ph.D. from the University of California at Los Angeles, both in history. Currently, he is the president of the University of Texas at San Antonio, and a time line detailing Dr. Romo’s accomplishments as an athlete and a scholar is included.

Bobbie is an energetic Red-necked Wallaby. She can jump, she can bounce, and she can skip. She can even hop on one leg. Her friends Koala, Wombat, and Possum are very impressed. But there is one thing Bobbie cannot do. She cannot do the splits. And she wants to.