Every summer Quill and his friends are put ashore on a remote sea stac to hunt birds. But this summer, no one arrives to take them home. Surely nothing but the end of the world can explain why they’ve been abandoned―cold, starving and clinging to life, in the grip of a murderous ocean. How will they survive such a forsaken place of stone and sea?

Patryk and Jurek are as much friends as rivals in the small Russian-occupied Polish village where they live. When, in August 1914, Patryk finds an old button on the forest floor, Jurek becomes wildly jealous. Not long after, World War I comes to Poland, bringing one invading army after another to the village. Jurek devises an exciting dare among the seven boys in their pack: whoever steals the best military button will be Button King. The boys agree. The contest is on. The competition escalates from stealing uniform buttons on a wash line to looting the bodies of dead soldiers to setting up an ambush. Leading the charge is Jurek, who will do anything to be Button King. It’s only Patryk who tries to stop Jurek’s increasingly dangerous game before it leads to deadly consequences.

Supremely loyal, 16-year-old Rocky expects to take over his father’s notorious gang, Three Star Pa, one day but after catching his father in a lie, discovers they are not as alike as he believed.

One hot summer morning, only weeks after his father’s death, Davie steps out his front door into the familiar streets of the Tyneside town that has always been his home. But this seemingly ordinary day takes on an air of mystery and tragedy as the residents learn that a boy has been killed. Despite the threat of a murderer on the loose, Davie turns away from the gossip and sets off toward the sunlit hill above town, where the real and imaginary worlds begin to blur around him. As he winds his way up the hillside, Davie sees things that seem impossible but feel utterly right, that renew his wonder and instill him with hope. Full of the intense excitement of growing up, David Almond’s tale leaves both the reader and Davie astonished at the world and eager to explore it. Award-winning author David Almond pens the dreamlike tale of a boy rediscovering joy and beauty within and around him, even amid sorrow.

In 1917, Thomas, a thirteen-year-old coal miner seeking his missing brother, James, joins the Claykickers, who tunnel beneath the battlefields of the Western Front as they learn to be men.

A talented young runner, Santino lives in Palermo, Sicily—a beautiful region of Italy that’s dominated by the Mafia. With Santino’s first communion approaching, his father and grandfather carry out a theft to pay for the party—but they steal from the wrong people. A young, cocky Mafioso summons them to a meeting, and they bring the boy. As Santino wanders off into the old abandoned neighborhood, he hears shots and runs back to see two armed men and his father and grandfather slumped over in the car. The boy barely escapes with his life. Now, he’s left with a choice: cooperate with police and be a “rat,” or maintain Omertà: the code of silence. Twelve-year-old Lucio lives in the northern Italian city of Livorno and dreams of sailing when not taking care of his his young sister, Ilaria, and his sick mother, who is convinced that a witch has cursed her. One day, Lucio’s mother goes missing and he receives a mysterious text: “Come to Palermo. Mamma is dying.” Panicked, Lucio grabs Ilaria and rushes to Sicily, where Lucio’s and Santino’s stories converge with explosive results.

The tenth installment in Velásquez s acclaimed Roosevelt High School Series that focuses on social issues relevant to teens, Forgiving Moses addresses the painful issue of children, particularly brown and black youth, whose fathers are not present in their lives. Touching on the disproportionately high number of men of color in prison and its effects on society, this short novel for teens will generate conversations about the possible consequences of making bad choices, responsibility to family and the impact of incarceration.

In Petra Postert and Jens Rassmus’s illustrated I Need All of It, a little boy recounts to his father the tales of how he received the three objects in his pocket and why he needs to keep them. 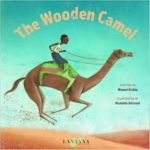 Etabo dreams of being a camel racer. One day he might even beat his older brother when they race. But with the price of water rising, Etabo’s father must sell the camels, and his siblings must find work. What will Etabo do now? From acclaimed Kenyan filmmaker Wanuri Kahiu and Italian illustrator Manuela Adreani, this story of love and hope centers on the inspiring Turkana people of northwest Kenya. Told with gentleness and humor, it is a universal story about keeping one’s dreams alive.