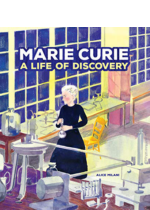 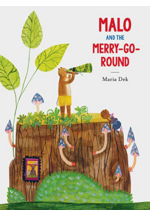 “Malo the shrew promised to make pickles with Poto-but when he hears there’s a new merry-go-round in the forest, he selfishly sneaks off to find it, learning lessons about the importance of kindness, friendship, and integrity in the end”

In this graphic adaptation of a story by Stanislaw Lem, a meteoroid damages astronaut and space traveller Ijon’s spaceship, and he finds himself caught in a time loop, contending with past and future versions of himself.

Patryk and Jurek are as much friends as rivals in the small Russian-occupied Polish village where they live. When, in August 1914, Patryk finds an old button on the forest floor, Jurek becomes wildly jealous. Not long after, World War I comes to Poland, bringing one invading army after another to the village. Jurek devises an exciting dare among the seven boys in their pack: whoever steals the best military button will be Button King. The boys agree. The contest is on. The competition escalates from stealing uniform buttons on a wash line to looting the bodies of dead soldiers to setting up an ambush. Leading the charge is Jurek, who will do anything to be Button King. It’s only Patryk who tries to stop Jurek’s increasingly dangerous game before it leads to deadly consequences.

A fictionalized account of the experiences of a Polish Jew, Moishe, who with his parents, brother, and sister, struggles to survive the Nazi invasion and Holocaust.

In 1942 sixteen-year-old Chaya Lindner is a Jewish girl living in Nazi-occupied Poland, a courier who smuggles food and documents to the isolated Jewish ghettos in southern Poland, depending on her forged papers and “Aryan” features–but when a mission goes wrong and many of her colleagues are arrested she finds herself on a journey to Warsaw, where an uprising is in the works.

A child describes the family car, which is as red as a fire engine, and is driven by his father through wind, snow, and all seasons.

Life is becoming dangerous for the Jews of Krakow in 1936 with incidents of violence and persecution increasing day by day. Twelve-year-old Anna begs her father to leave Poland, but he is reluctant to give up his position as an acclaimed clarinetist in the Krakow Philharmonic Orchestra. After barely escaping from an attack by a group of violent thugs, it becomes clear that the family must leave. Anna’s father auditions for the famous Bronislaw Huberman, a world renowned violinist, who is searching for Jewish musicians to play in a new orchestra in Palestine. This poignant story is based on real events in pre-war Poland and Palestine. After saving 700 Jews and their families, Bronislaw Huberman went on to establish what later became the Israel Philharmonic Orchestra.