On the first day of summer vacation, ten-year-old Rafi and his father are searching for their lucky, six-toed cat, Scratch, when an earthquake knocks them off a cliff and they find themselves on a pirate ship, heading toward adventure. 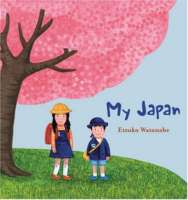 A young boy, Yumi, discusses his life in Japan, describing his home life, food, a typical day at his school, summer vacation, transportation, holidays, the city, and systems of writing.

When an overweight high school student from Santa Monica spends the summer in Italy, she learns to relish life and understand the true meaning of beauty.