“The hour has come to speak of troubled times. It is time we spoke of Skullyville.” Thus begins Rose Goode’s story of her growing up in Indian Territory in pre-statehood Oklahoma. Skullyville, a once-thriving Choctaw community, was destroyed by land-grabbers, culminating in the arson on New Year’s Eve, 1896, of New Hope Academy for Girls. Twenty Choctaw girls died, but Rose escaped. She is blessed by the presence of her grandmother Pokoni and her grandfather Amafo, both respected elders who understand the old ways. Soon after the fire, the white sheriff beats Amafo in front of the town’s people, humiliating him. Instead of asking the Choctaw community to avenge the beating, her grandfather decides to follow the path of forgiveness. And so unwinds this tale of mystery, Indian-style magical realism, and deep wisdom.

After the Affair of the Clockwork Scarab, Evaline Stoker and Mina Holmes are eager to help Princess Alix with a new case. Seventeen-year-old Willa Aston is obsessed with spiritual mediums, convinced she is speaking with her mother from beyond the grave. What seems like a case of spiritualist fraud quickly devolves into something far more menacing: someone is trying to make Willa “appear lunatic,” using an innocent-looking spiritglass to control her. The list of clues piles up: an unexpected murder, a gang of pickpockets, and the return of vampires to London.

Violet Willoughby doesn’t believe in ghosts. But they believe in her. After spending years participating in her mother’s elaborate ruse as a fraudulent medium, Violet is about as skeptical as they come in all matters supernatural. Now that she is being visited by a very persistent ghost, one who suffered a violent death, Violet can no longer ignore her unique ability. She must figure out what this ghost is trying to communicate, and quickly because the killer is still on the loose. Afraid of ruining her chance to escape her mother’s scheming through an advantageous marriage, Violet must keep her ability secret. The only person who can help her is Colin, a friend she’s known since childhood, and whom she has grown to love. He understands the true Violet, but helping her on this path means they might never be together. Can Violet find a way to help this ghost without ruining her own chance at a future free of lies? 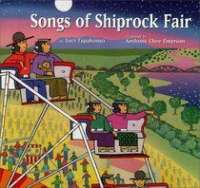 A young Navajo girl enjoys every part of the annual Shiprock Fair, including the dances, parade, carnival, exhibits, contests, food, and the chance to visit with relatives.

A fascinating story set on a remote island untouched by time. Uido is ecstatic about becoming her tribe’s spiritual leader, but her new position brings her older brother’s jealousy and her best friend’s mistrust. And looming above these troubles are the recent visits of strangers from the mainland who have little regard for nature or the spirits, and tempt the tribe members with gifts, making them curious about modern life. When Uido’s little brother falls deathly ill, she must cross the ocean and seek their help. Having now seen so many new things, will Uido have the strength to believe in herself and the old ways? And will her people trust her to lead them to safety when a catastrophic tsunami threatens? Uido must overcome everyone’s doubts, including her own, if she is to keep her people safe and preserve the spirituality that has defined them.

One girl’s harrowing trek from exile and slavery to hope in a new land — all based on a true story. In the early 1980s, thousands of Ethiopian Jews fled the civil unrest, famine and religious persecution of their native land in the hopes of being reunited in Jerusalem, their spiritual homeland, with its promises of a better life. Wuditu and her family risk their lives to make this journey, which leads them to a refugee camp in Sudan, where they are separated. Terrified, 15-year-old Wuditu makes her way back to Ethiopia alone. “Don’t give up, Wuditu! Be strong!” The words of her little sister come to Wuditu in a dream and give her the courage to keep going. Wuditu must find someone to give her food and shelter or she will surely die. Finally Wuditu is offered a solution: working as a servant. However, she quickly realizes that she has become a slave. With nowhere else to go, she stays — until the villagers discover that she is a falasha, a hated Jew. Only her dream of one day being reunited with her family gives her strength — until the arrival of a stranger heralds hope and a new life in Israel. With her graceful long neck, Wuditu is affectionately called “the giraffe.” And like the giraffe who has no voice, she must suffer in silence. Based on real events, Wuditu’s story mirrors the experiences of thousands of Ethiopian Jews.

Many centuries ago, in a kingdom in the foothills of the Himalayan mountains, a miraculous child was born to the king and queen. The young prince, Siddhartha, was raised in the greatest luxury, sheltered from all pain and ugliness. But one day Siddhartha left the palace and saw, for the first time, human suffering and death. He knew then that he must relinquish everything– his family, his wealth, his position– to discover the Truth of life and death. With only a few humble possessions, he began a remarkable spiritual journey that ended many years later under a bodhi tree. There he finally discovered the Truth and became an Enlightened One, a Buddha. The Buddha taught the Truth and the path to inner peace for forty-five years, attracting thousands of disciples. Today millions of people around the world live by his teachings.Demi’s exquisite illustrations, inspired by the paintings and sculptures of several Asian cultures, are layered with meaning; each brush stroke has a special significance. Demi, herself a Buddhist, brings her devotion to the teachings of the Buddha and her vast knowledge of his life to this comprehensive picture-book biography of an extraordinary spiritual leader. 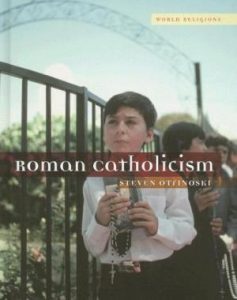 An exploration of the origins and history, basic tenets and beliefs, organizations and structure, practices, influence, and contemporary role of the Catholic Church. 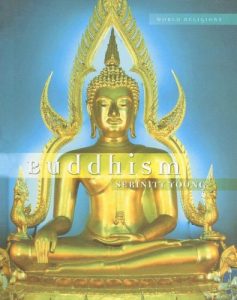 “Provides an overview of the history and origins, basic tenets and beliefs, organizations, traditions, customs, rites, societal and historical influences, and modern-day impact of Buddhism”–Provided by publisher.