Tired of living in the forest, Little Bear sets out to have an adventure but when he finds a big house inhabited by a “monster” he is very happy to flee to the safety of his bear family.

A brief biography of South America’s great soldier and patriot who led many countries out from under Spanish dominance. 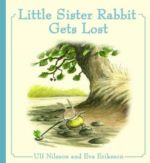 Little Sister Rabbit wants to have an adventure all by herself. She loves stamping in puddles, building boats and skimming stones without her clever big brother telling her what to do. But she’s having so much fun that she loses her way! Will Little Sister Rabbit be able to find her way home . . . or will she need help from someone unexpected? >From the award-winning Swedish children’s author, Ulf Nilsson, and one of Europe’s best-loved illustrators, Eva Eriksson, comes this charmingly illustrated tale of independence and sibling love. These classic Little Sister Rabbit stories are much-loved bestsellers in Sweden and can now be enjoyed by new generations in English. They are beautiful, full colour, hardback, gift editions with a cloth spine.

Babysaurus loves playing hide-and-seek with his Papasaurus. But one day, no matter where he looks, he can’t find him, so Babysaurus turns to his prehistoric friends for help. Where can his Papasaurus be?

Kyle has to go. There’s just one problem: as a young three-toed sloth, he lives high in the rainforest canopy with his mom, and it’s a LONG way down to the forest floor. Like other sloths, Kyle only goes down to the ground once a week when he has to do his “business.” And he’s never made the journey by himself before.

A Mexican boy who wants to be an artist goes to live with an uncle who makes him work in the fields all day and board in the barn at night. In spite of the severe treatment and with the encouragement of a village artist, the boy creates a place for himself as an artist and an individual.

Growing up in a family of wandering tinkers in Scotland, Cat McPhie fights for the right to be her own person and live the kind of life she wants.

The White Bicycle is the third stand-alone title in the Wild Orchid series about a young woman with Asperger’s Syndrome. This installment chronicles Taylor Jane’s travels to the south of France where she spends a summer babysitting for the Phoenix family. Including flashbacks into Taylor’s earliest memories, along with immediate scenes in Lourmarin, a picturesque village in the Luberon Valley, The White Bicycle results in a journey for independence both personal and universal, told in Taylor’s honest first-person prose.

Madeline, smallest and naughtiest of the twelve little charges of Miss Clavel, wakes up one night with an attack of appendicitis.