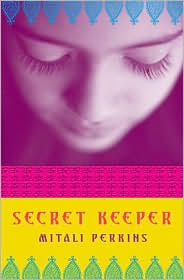 This book takes place in the 1970’s during Indira Gandhi’s regime. Asha’s father is unable to find an engineering position in India and moves to the United States to look for employment and eventually to send for his family. Asha, her older sister Reet, and mother move in with their father’s family. At this same time Asha becomes a woman and is expected to stop playing tennis and cricket, grow her hair long, and wear a sari. This transition from childhood to woman is difficult because she has grown up with a lot of freedom.

Uncle’s family isn’t very welcome to this threesome and Asha escapes to the rooftop to pour her heart out in a journal, the “secret keeper.” Asha is unable to go to school because of a lack of money, so she reads aloud to her two cousins and tells many stories to pass the time. Asha also is a reader, “She’d already demolished the few books she’d brought along. They were dead, at least for a while. Certain stories could come back to life on the second, third, and even tenth reading if you gave them enough time between encounters” (p. 55).

Reet and Asha’s mother suffer from depression and while at their uncle’s house, they learn secrets that she has been withholding from them for years. Asha dreams of becoming a psychologist so that she can become a “mender of the mind” and help people release their secrets. Asha also has a secret — she begins a forbidden friendship with a boy next door. Many new and unexpected secrets are revealed as the book unfolds. A map and glossary of Bangla words are included.

Adolescent girls will thoroughly enjoy this book because Asha is rebellious, courageous, and selfless and they will laugh out loud at Asha’s crazy antics. They will also relate to Asha’s feelings towards boys and becoming a woman. Themes such as mother/daughter and sister relationships and friendships would make this an interesting book for family literature circles. Mitali Perkins was born in Calcutta, India, and lived in various parts of the world until moving to California at age 11. She says that story was her lifeline in middle school, as she navigated between California culture and the Bengali culture of her home — her protagonists are thus often strong female characters trying to bridge different cultures. She lived in Bangladesh, India and Thailand as an adult before moving to Massachusetts. Visit her Web site for more reflections about her life and writing.

Perkins has written other books sharing personal insights into Indian culture and history, especially regarding the role of women and education. The Secret Keeper might be paired with books such as Rickshaw Girl (Perkins, 2007) or Kashmira Sheth’s Keeping Corner (2008) or Royal Dark, Mango Sweet (2006).