When Soviet troops invade Japanese-occupied Manchuria during the last days of World War II, 12-year-old Natsu Kimura must care for her younger sister as they struggle to survive and return to Japan.

Under the Broken Sky is a WOW Recommends: Book of the Month for April 2020.

When he learns that the nightingale’s song is one of the most beautiful sounds in the world, the Emperor of China sends his courtiers to find the bird and present it as a guest at court. The nightingale can speak to humans and agrees to come, but when the Emperor receives a mechanical nightingale covered in jewels, he discards the real bird, which flies back to its home. Hans Christian Andersen’s beloved story in which a king learns humility from a bird was written in 1843 to honor Jenny Lind, the famous opera singer dubbed the Swedish Nightingale. This new edition of the childhood favorite features shimmering color illustrations by Russian artist Igor Oleynikov. 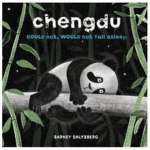 High in the trees in the middle of the night, all of the pandas are sleeping except for Chengdu, who tries everything and still cannot fall asleep until he finds the perfect spot–atop his brother, Yuan.

The hero of this story is a little bird with a very sweet song-so sweet it brings tears to the eyes of the Chinese Emperor and charms Death right back into the graveyard.

The author describes 1940s China and her quest, as a nine-year-old girl, to buy a precious apple for her grandmother’s birthday. By the author of A Day on a Shrimp Boat.