Sumo Boy saves a girl from a bully using real sumo wrestling moves. When he hears a little girl’s cry of despair, he jumps to the rescue.

Bullied and despised for being human-sized, a young giant demonstrates his bravery and cleverness in a series of adventures.

New fears for fourth-grader Calvin include a school bully named Tito and the return of his estranged father, rock star Little Johnny Coconut.

JoJo may be small, but his heart is big and so are his dreams. The red Rocket Racers in the window of Smiling Sam’s Shoe Shop could be his, but only if he can stand up to the big kids and run the race of his life. The boy in the mirror looks doubtful, but the boy standing in front of it is going to try. Anything could happen!

Charlotte the sheep proves her courage once again when the rest of her flock, including Wolfi and his gang of pretend wolves, trembles in fear at the sound of howling in the forest.

After a classmate commits suicide, Kana Goldberg—a half-Japanese, half-Jewish American—wonders who is responsible. She and her cliquey friends said some thoughtless things to the girl. Hoping that Kana will reflect on her behavior, her parents pack her off to her mother’s ancestral home in Japan for the summer. There Kana spends hours under the hot sun tending to her family’s mikan orange groves.Kana’s mixed heritage makes it hard to fit in at first, especially under the critical eye of her traditional grandmother, who has never accepted Kana’s father. But as the summer unfolds, Kana gets to know her relatives, Japan, and village culture, and she begins to process the pain and guilt she feels about the tragedy back home. Then news about a friend sends her world spinning out of orbit all over again.

After succumbing to peer pressure from a bully, an unusual friendship between Garmann and the Stamp Man arises out of a near-disaster. 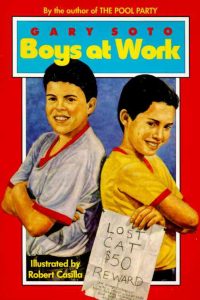 Rudy Herrera and his friend, Alex, scramble to earn enough money to replace Slinky’s accidentally broken Discman and then find out that the Discman really belonged to big, bad Trucha. By the author of The Pool Party.

Jewel is shuttled from one foster home to another. But Jewel wasn’t always a “State Kid.” Her mother Angela’s constant search for happiness through a steady stream of unsavory boyfriends leads to the state’s intervention in Jewel’s life. Listening to her new foster mother’s list of “nos”—no drugs, no lying, no stealing, no skipping school, no boys in or out of the house, no being late—Jewel realizes that her mother said “yes” a lot. Probably too much. She remembers saving Angela’s life when one of many boyfriends beat her, trying to hide another boyfriend’s attempts to rape her when she was fourteen, and being sent to a foster home to please the latest boyfriend. But still, Jewel worries about her mother and knows that she will once again pick up the pieces when the latest jerk leaves. Bit by bit Jewel’s life begins to change for the better after her latest move to a new foster home and school. Although most people can’t see past her tough “State Kid” façade—spray-painted hair, heavy make-up, ripped clothing and unlaced shoes—her English teacher realizes there’s more to her then meets the eye. He convinces Jewel to tutor a fellow student who needs help with math, and gradually she learns how to make friends. In the process, she touches the lives of many people around her, including her social worker, teachers who believe in her, her new-found, tentative friends, and even their parents. But when she’s forced to choose between her life-long job—taking care of her mother”—and doing what’s right for herself, old habits and loyalties are hard to break. Jewel is sure that this time, she can save her mom. But will she be able to save herself?