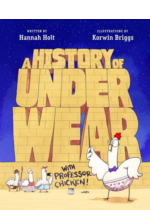 Packed with information, hilariously but accurately (well…except for the chickens) illustrated, Hannah Holt and Korwin Briggs’ A History of Underwear with Professor Chicken is sure to wedge its way into the annals of history-based picture books. From Paleolithic loincloths to Henry VIII’s wives wearing underwear on their heads to Mary Walker, a civil war surgeon who was arrested for wearing men’s underwear and clothing to better work on patients, this book surveys the vast and fascinating history of our most private clothing. Modeled by chickens, we trace the history of underwear from the very first discovery- a paleolithic nomad whose body was found completely preserved in ice. From there, we look across time and culture in this completely accessible, new take on boring old nonfiction picture books.

In the nineteenth century, a caged canary that sings in the silver mines travels with a canary dealer from the Harz Mountains of Germany to a new home in Poughkeepsie, New York. Includes notes on the history of canaries. 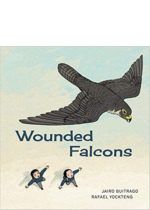 Adrián is always in trouble, at school and at home, while Santiago gets along quite well. But they are friends. When Adrián finds a wounded bird in an abandoned lot in the midst of the city, things begin to change. Taking care of the bird, learning all about it, discovering that it is a falcon, loving it — and accepting what this love means — gives Adrián a chance to show others a glimpse of who he truly is. Santiago has always known that Adrián has a big heart, and his steadfast friendship is also the reason Adrián has a chance to heal.

After her family is exiled from the capital of Tsaretsvo, Olga must use her wits, cunning, and forbidden magic to rescue her kidnapped sister, Mira, and return home from the Republic of Birds. Inspired by Russian folklore. 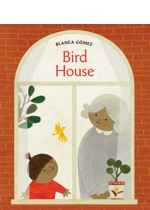 On a snowy day, a grandmother and grandchild find an injured bird. They take it home and care for it until it can fly around the living room. It is fantastic—just like everything at Abuela’s house! But a fantastic moment is also bittersweet, for the little bird’s recovery means that it’s time to let it fly free. Drawing inspiration from a formative childhood experience, Blanca Gómez crafts a deceptively simple story that is morally and emotionally resonant and is brimming with love, wonder, and a deep respect for the natural world.

Two brothers bound together by affection and responsibility. Jadran is five years older than Josh and huge enough to be nicknamed Giant. Josh is younger, and smaller; but his sweet and stubborn brother thinks in a way that would be more typical of a small child. They are both dealing with changes to their newly blended, Muslim family. So Josh looks after Jadran and they both adjust. When the brothers find an injured young crane, Jadran wants to bring it back to their small apartment and teach it to fly at any cost. And it turns out the cost is high.

Bear can’t imagine a whole winter without her friend, so when Bird migrates south, Bear decides to follow. She’s never left the forest before, but that won’t stop her from crossing oceans and mountains—and sending letters along the way. But a surprise is waiting for Bear on the beach…

Told in rhyming verse, this is the touching true story of an oil-soaked penguin, the man who rescues him and an unlikely friendship.