In the peaceful realm of Tequende, all second-born children at the age of fifteen must journey to the Alcazar to fulfill the mandate of the Oath of Guilds. While training to join the ranks of the Queen’s legendary army, the Second Guard, fifteen-year-old Talimendra and her new friends Zarif and Chey discover a conspiracy that could bring down the entire Tequendian Empire.

The once highly in-demand detective Alan Knightley has just woken up after an unexplained incident kept him asleep for four years. While he was out cold, his son, Darkus, took it upon himself to read of all his dad’s old cases, and he’s learned a lot about the art of detection. It’s a good thing too—because suddenly the duo find themselves caught up in a crazy conspiracy that involves a group of villainous masterminds (who keep appearing and then vanishing), some high-speed car chases (that will have everyone fastening their seat belts), and a national, bestselling book with the power to make people do terrible, terrible things. But because Alan is still suffering the effects of his coma, he tends to, well, fall asleep at the worst possible moments, Meaning that young Darkus might just have to solve this mystery by himself.

To escape from a planned arranged marriage, teenaged Cat Hunter disguises herself as a boy and stows away on a smuggler’s airship where she discovers a world of excitement and adventure. 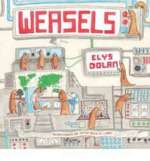 Weasels. What do you think they do all day? Plot world domination — that’s what! This rollicking madcap weasel adventure is packed full of mischief and mayhem, featuring hilarious weasel antics rendered in Elys Dolan’s exuberant style.