French has been captured by the Recruiters, confined to one of the infamous residential schools, where the government extracts the marrow of Indigenous people in order to steal the ability to dream, and where the captured are programmed to betray others of their kind, something he discovers has been done to his brother; meanwhile the other survivors, his found family, are hunting for him, determined to rescue him–and French has to decide just how much, and whom, he is willing to sacrifice to survive and be reunited with Rose and the others.

Sequel to The Marrow Thieves.

This book is a WOW Recommends: Book of the Month for March 2022.

In an isolated society, one girl makes a discovery that will change everything and learns that a single stone, once set in motion, can bring down a mountain.

Nazi England, 2014. Jessika Keller is a good girl–a champion ice skater, model student of the Bund Deutscher Mädel and dutiful daughter of the Greater German Reich. Her best friend, Clementine, is not so submissive. Passionately different, Clem is outspoken, dangerous and radical. And the regime has noticed. Jess cannot keep both her perfect life and her dearest friend, her first love.

Fourteen-year-old Charlie Law has lived in Little Town, on the border with Old Country, all his life. He knows the rules: no going out after dark; no drinking; no litter; no fighting. You don’t want to get on the wrong side of the people who run Little Town. When he meets Pavel Duda, a refugee from Old Country, the rules start to get broken. Then the bombs come, and the soldiers from Old Country, and Little Town changes forever. Sometimes, to keep the people you love safe, you have to do bad things. As Little Town’s rules crumble, Charlie is sucked into a dangerous game. There’s a gun, and a bad man, and his closest friend, and his dearest enemy. Charlie Law wants to keep everyone happy, even if it kills him. And maybe it will . . . But he’s got to kill someone else first.

Cassica and Shiara have grown up in Coppermouth, a dust choked town in the Outback, but now they hope to use their skills as race driver and mechanic to take on the Widowmaker, an off-road rally through some of the most dangerous places on Earth, to win fame and fortune–provided they survive the race.

Jason Zhou survives in a divided society where the elite use their wealth to buy longer lives. The rich wear special suits, protecting them from the pollution and viruses that plague the city, while those without suffer illness and early deaths. Frustrated by his city’s corruption and still grieving the loss of his mother who died as a result of it, Zhou is determined to change things, no matter the cost. With the help of his friends, Zhou infiltrates the lives of the wealthy in hopes of destroying the international Jin Corporation from within. Jin Corp not only manufactures the special suits the rich rely on, but they may also be manufacturing the pollution that makes them necessary. Yet the deeper Zhou delves into this new world of excess and wealth, the more muddled his plans become. And against his better judgment, Zhou finds himself falling for Daiyu, the daughter of Jin Corp’s CEO. Can Zhou save his city without compromising who he is, or destroying his own heart?

A new drug is on the street. Everyone’s buzzing about it. Take the hit. Live the most intense week of your life. Then die. It’s the ultimate high at the ultimate price. Adam thinks it over. He’s poor, and doesn’t see that changing. Lizzie, his girlfriend, can’t make up her mind about sleeping with him, so he can’t get laid. His brother Jess is missing. And Manchester is in chaos, controlled by drug dealers and besieged by a group of homegrown terrorists who call themselves the Zealots. Wouldn’t one amazing week be better than this endless, penniless misery? After Adam downs one of the Death pills, he’s about to find out.

To escape from a planned arranged marriage, teenaged Cat Hunter disguises herself as a boy and stows away on a smuggler’s airship where she discovers a world of excitement and adventure.

“In the final volume of the Agora trilogy, Mark and Lily lead the revolution to unseat the powerful elite and discover the answers to their questions about their origins while confronting the dark and twisted nature of their destinies”–Provided by publisher. 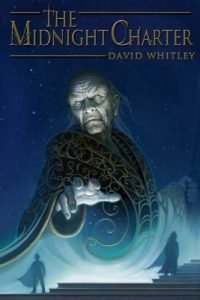 In a society based on trade, where everything can be bought and sold, the future rests on the secrets of a single document-and the lives of two children whose destiny it is to discover its secrets. In this spellbinding novel, newcomer David Whitley has imagined a nation at a crossroads: misshaped by materialism and facing a choice about its future.