Bunny Rabbit has lost her toy duck! So Bunny and her brothers jump in their boat and head down the river in search of Little Duck. Their journey takes them from the mountaintop to the open sea, but there are many other adventures for you to follow along the way. Why are the Speedy Pigs in such a hurry? What will Laura Lamb catch on her fishing line? And what kind of mischief will Sippi Swan get into?

Classic children’s picturebook about a good-natured bear who is a bit accident prone.

Seventeen-year-old Xochi’s life changed when she became governess to precocious twelve-year-old Pallas, but the duo unintentionally summons a pair of ancient creatures determined to right the wrongs of Xochi’s adolescence.

Thrown from Mount Olympus as a newborn and caught by Thetis and Eurynome, who raised him on the island of Lemnos, Hephaistos had an aptitude for creating beautiful objects from a very young age. Despite his rejection from Olympus, he swallowed his anger and spent his days perfecting his craft. His exquisitely forged gifts and weapons earned him back his seat in the heavens, but he was not treated as an equal―his brothers and sisters looked down at him for his lame leg, and even his own wife, Aphrodite, was disloyal. In this installment of George O’Connor’s bestselling Olympians graphic novel series, witness Hephaistos’ wrath in God of Fire as he creates a plan that’ll win him the respect he deserves.

All rabbits love books, except for Henry – he prefers games and adventures. But then he finds one very special book, and when he reads it, someone very special finds him. 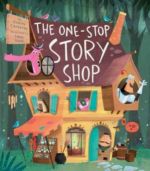 One day, a brave knight sets out for the cave of a terrible dragon. Come out and meet your match, you great big beast! the knight announces. But to his dismay, he learns that the dragon has gone on vacation. How can I finish my story? the knight wails. With no dragon, my story is STUCK! Then he discovers the One-Stop Story Shop, which just might be what he needs to finish his talebut not exactly the way he had planned! A thrilling adventure through the magical world of storytelling.

Accused of stealing the god of love’s bow and arrow, Aru has ten days to find the real thief or risk being kicked out of the Otherworld.

The final story in this big-hearted series takes on the most important case everinvestigated in Detective Gordon’s forest. Where is Buffy’s mother? Gordon faces his old nemesis, the fox, in an investigation that leads to the edges of the forest.

To prevent the Mayan gods from battling each other and destroying the world, thirteen-year-old Zane must unravel an ancient prophecy, stop an evil god, and discover how the physical disability that makes him reliant on a cane also connects him to his father and his ancestry.

Moira Young’s The Road to Ever After is a magical and moving adventure about an unlikely friendship and an unforgettable journey.