A young boy wakes up to the sound of the sea, visits his grandfather’s grave after lunch and comes home to a simple family dinner, but all the while his mind strays to his father digging for coal deep down under the sea. Stunning illustrations by Sydney Smith, the award-winning illustrator of Sidewalk Flowers, show the striking contrast between a sparkling seaside day and the darkness underground where the miners dig. With curriculum connections to communities and the history of mining, this story brings a piece of history to life. The ever-present ocean and inevitable pattern of life in a maritime mining town will enthrall children and move adult readers.

Life is incredibly hard for all the immigrant families who work in the mine, but harder still for Hannah’s – her father recently killed in the mine, her mother nearly dead from giving birth to the latest child. Hanna defies all convention and passes herself off as a boy to get into the mine that is their only real hope of salvation. Common wisdom is that women are bad luck in a mine, so when her secret is discovered, the superstitious miners are furious. Will she survive this too? Author Diana Vazquez paints a gritty portrait of the bleak mining shanty town and the lives of the people who live there. But it is the indomitable spirit of her unsentimental, blunt, and fearless heroine that will remain memorable to all who encounter her. 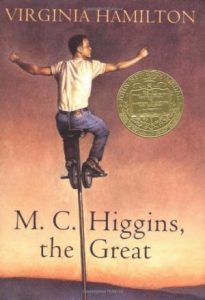 As a slag heap, the result of strip mining, creeps closer to his house in the Ohio hills, fifteen-year-old M.C. is torn between trying to get his family away and fighting for the home they love.

Privileged, isolated Helena and impoverished, unemployed Hugh find some fulfillment in their love, but they are still trapped in this dismal Wales of the future — until they meet an unusual group of “patchwork people,” who are working carefully and thoughtfully with what remains of the Earth’s resources.

A novel of the life of coal miners in British Columbia in 1916.

Presents an overview of the history, geography, and people of Guatemala by introducing Mayan, Cakchiquel, Ladino, and Garifuna children.

A young boy of rural Lesotho needs reassurance that his father is still his papa, too, when a new baby is born into the family.