Presents the life of the nineteenth-century Frenchman, accidentally blinded as a child, who originated the raised dot system of reading and writing used throughout the world by the blind.

During a hospital stay after a serious traffic accident, nine-year-old Rose worries about her own injuries and the condition of her father and younger sister and comes to terms with her mother’s death. 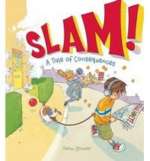 A heedless little boy and his dog slam the door as they run out to complete an errand, unknowingly dislodging a red ball that bounces through the neighborhood and triggers an escalating series of mishaps.

When a flood crashes through the valley, the Moomins move into a theater as it floats by, and they put on a play to find their lost relatives.

I wanted to roar out. touch things i had never touched. to see if it was true. was i still here was this life still here. on this side. whatever you call it dude. wanted to touch everything like van Gogh touched and smeared everything when he painted. so i wrote it and spoke it. maybe mama would hear me. cuz i could hear her. sayin’ When your heart hurts, sing. wherever you go.

Lucky Z has always lived on the edge—he loved to skateboard, to drag race, to feel alive. But things have taken a turn—he’s living with new foster parents and a tragic past. An accident changed everything. And only his voice will set him free.

Lauren Child’s spunky character returns and—as if things could get any livelier in Clarice Bean’s household—Uncle Ted is babysitting! Who can Mom and Dad get to babysit the feisty Clarice, her pesky brother Minal Cricket, and the school’s guinea pig, Albert, who’s visiting for spring break? (Not to mention teenage brother Kurt, who abhors daylight; big sis Marcie, who chats on the phone all day; and Granddad, who tends to wander off.) Only Uncle Ted, firefighter and movie addict, can be persuaded. Will he survive the week?

In his children’s book debut, fine artist Alex Beard brings to life an African savanna filled with humor and misunderstandings. When Bird mixes up something Turtle says, he accidentally starts a rumor about the watering hole drying up. One misunderstanding leads to another, with animals making their own hilarious assumptions. No one is hearing anything right, and soon the animals are in an uproar from one end of the jungle to the other. Elephant is trumpeting, Croc is snapping, and the Flamingos are fleeing! Beard’s story will have every child wondering if peace can ever be restored in the animal kingdom.

WOULD YOU RATHER know what’s going to happen or not know? A summer night. A Saturday. For Natalie’s amazing older sister, Claire, this summer is fantastic, because she’s zooming off to college in the fall. For Natalie, it’s a fun summer with her friends; nothing special. When Claire is hit by a car, the world changes in a heartbeat. Over the next four days, moment by moment, Natalie, her parents, and their friends wait to learn if Claire will ever recover.