Cara and her family have been packed for days, ready to take everything they can’t live without and flee when the wildfire reaches their home. But when the evacuation order comes, all that preparation was not enough. Because what Cara can’t live without most is her dog Mike, and he is nowhere to be found.

Abelardo defies his father’s instructions and sets out to free a whale caught in their tangled fishing net.

Two children captured by a band of rebel soldiers in the Congo vow to protect an orphaned gorilla baby in this powerful, thought-provoking, and vividly compelling novel from award-winning storyteller Gill Lewis. Deep in the heart of the Congo, a baby gorilla is captured by a group of rebel soldiers. Imara and Bobo are also prisoners in the rebels’ camp. When they learn that the gorilla will be sold into captivity, they swear to return it to the wild before it’s too late. But the consequences of getting caught are too terrible to think about.

This book invites readers to explore the mysterious world of time zones. The illustrations on each page depict the same single moment in time, presenting the reader with a vast array of interwoven human stories from around the world. Readers are introduced to a number of different people and activities, from to a nomad leading his camels through the Sahara Desert to a pod of humpback whales traveling through the Pacific Ocean.

When a polar bear arrives unexpectedly in the woods, the animals fear and avoid him, suspecting him to be dangerous – and his habit of collecting leaves only adds to their distrust. Then one day, they watch as he attempts to fly over the water with wings made of colorful leaves…just trying to go home. 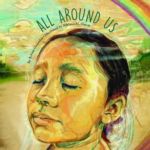 Finding circles everywhere, a grandfather and his granddaughter meditate on the cycles of life and nature.

Sent to Cuba to visit the father he barely knows, Edver is surprised to meet a half-sister, Luza, whose plan to lure their cryptozoologist mother into coming there, too, turns dangerous. 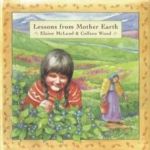 Tess has visited her grandmother many times without really being aware of the garden. But today they step outside the door and Tess learns that all of nature can be a garden. And if you take care of the plants that are growing, if you learn about them — understanding when they flower, when they give fruit, and when to leave them alone — you will always find something to nourish you. At the end of their day Tess is thankful to Mother Earth for having such a lovely garden, and she is thankful to have such a wise grandma.

In this search-and-find book from illustrator Emily Bornoff, readers try to spot the animals in various environments, from jungles to deserts to the Arctic. Emily Bornoff’s lovely patterns and the playful hide-and-seek elements make this a charming, interactive title with a fascinating nonfiction element—all the hidden animals are endangered. Learn where in the world they come from and what is being done to save them.