Keralie is the best pickpocket in all of the kingdoms of Quadara, but when she steals a “comm disk” and realizes a royal murder plot is afoot, she must learn who to trust and fast.

Samurai fear nothing, not even death. They are loyal and brave. Fourteen-year-old Seikei has studied the way of the samurai, and would like nothing more than to be one. But a samurai is born, not made; Seikei was born the son of a tea merchant, so a merchant he must be. But when a priceless ruby intended for the shogun-the military governor of Japan-is stolen by a ghost, Seikei finds himself having to display all the courage of a samurai. Seikei is the only person to have seen the thief, and now the famous magistrate, Judge Ooka, needs the boy\’s help to solve this mystery. Can the son of a merchant prove himself worthy to the shogun himself? 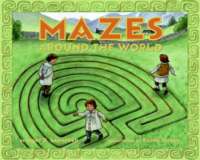 Puzzling and mysterious, mazes and labyrinths have fascinated people around the world for centuries. From England to Egypt, Greece to South Africa and beyond, travel on an exciting journey as you discover the secrets of these patterns.