Charles Darwin, born in the spring of 1809, seemed to be in ordinary child in upper middle class England. Though educated at Cambridge University with the idea of joining the priesthood, Darwin’s life took a whole new direction when he was offered an opportunity to participate in a government-sponsored, five-year voyage to South America and the Pacific to conduct surveys. His discoveries there laid the groundwork for a theory that would change the world.

In the center of Australia lies a strange desert wilderness called the Dead Heart. It is difficult to imagine anything can exist in such a forbidding place. But the Dead Heart contains amazing stories of adaptation and survival. Follow in the footsteps of early explorers like Charles Sturt and learn what the indigenous people of Australia have long known: not all is quite as it seems.

An account of the finding of the first entire skeleton of an ichthyosaur, an extinct sea reptile, by a twelve-year-old English girl who went on to become a paleontologist.

Describes the life of the English girl whose discovery of an Ichthyosaurus fossil led to a lasting interest in other prehistoric animals. 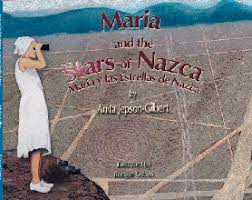 Describes how Maria Reiche, a German scientist living in Peru in the 1930s, observed the lines on the Nazca desert and was one of the first to realize that they formed the outlines of animals only visible from the air.

Two travelers discover the secrets of sleep from the Sandman himself. Includes a book-within-a-book with helpful hints for both sleepyheads and insomniacs.

Life is smoothest for thirteen-year-old Ellie when she keeps her opinions to herself, gets good grades and speaks carefully when her parents ask her to settle their arguments. She feels guilty that she welcomes the chance to spend the summer in another city with her mother’s older sister, Jeanette. Ellie makes a new friend and learns to play an Argentine instrument called the bandoneón, which she finds in her aunt’s basement. When she goes searching for the bandoneón’s original owner, she discovers a story of political intrigue and family secrets that help her start to figure out where her parents end and she begins.